Nigerian National Petroleum Corporation (NNPC) and Capital Oil and Gas have commenced Kero-Direct initiatives in ten states across Nigeria even as corruption continues to hinder Nigerians from getting access to the much needed product.

Managing Director, Capital Oil and Gas, Mr. Ifeanyi Ubah in a statement made this known in Lagos that another phase of sales of kerosene distribution across the states have commenced this week. 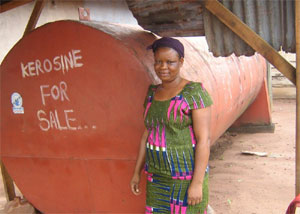 He said that Kero-Direct Scheme which was put together by the NNPC in partnership with Capital Oil and Gas will ensure the schemes will generate additional direct employments for Nigerians.

The Capital oil and gas boss said that the sales of kerosene has commenced in Ondo, Ebonyi, Enugu, Imo, Abia, Taraba, Adamawa, Plateau, Kano and Jigawa state this week.

“We have commenced sales of kerosene directly to the people at the grass root in about ten states of the federation which kick start this week.

“The NNPC/Kero-Direct scheme has continued its spread throughout Nigeria this week with distribution of kerosene to end user users at N 50 a litre,” he said.

Ubah said that another sale of kerosene distribution of end user will continue in other zone of the states after the completion of the ongoing schemes in the ten states.

He said that the Kero-Direct schemes had made the company to employ additional 557 youths, while the company has penciled down another 158 employment before the completions of the distribution.

“Under the arrangement, the Pipelines and Products Marketing Company (PPMC), a subsidiary of the NNPC provides the product that will be sold to end users at the official rate of N50 per litre, while the product is been dispensed through the use of Capital Oil dispensing trucks,” he said.

Ubah however, assures that middlemen will not hijack the scheme as has always been the case in the West African nation. The sale, according to him would be restricted to 25 litres for each household, adding that the sales of the product will be judiciously distributed to Nigerians as stipulated.

“Capital Oil has been very concerned about the difficulty in getting kerosene for domestic use. It is in response to this that the company came up with this innovation of deploying mobile filling stations with standard dispensing pumps to deliver kerosene at official price of N50 per litre to Nigerians.

“The scheme will afford our people greater access to the product with a view to reducing the use of charcoal and fire woods, which are hazardous to health,” Ubah added.

He lauded the initiative of Mrs Diezani Alison-Madueke, Minister of Petroleum Resources, and the NNPC, for their good intention to provide kerosene to end-users through truck dispensing.

Ubah said that the challenge of ending kerosene scarcity and ensuring uninterrupted supply of the product was one that could be handled through consistent investments in infrastructure.

Nigeria has suffered the shortage of House Hold Kerosene some years back and a major part of the reason has been trace d back to intense corruption right inside government as well as lack of strategic policies to help the nation ensure constant access to the much needed product which is in high demand by the poor. It is however of note that 75 percent of Nigerians live below the poverty line.