There are strong indications that the reports of the Customs Reform Committee which was constituted last year and headed by Former Permanent Secretary of the Ministry of Finance, Mr. Achinivu Ochai might be facing heavy oppositions from powerful individuals in government who do not want the reports implemented as one of the member of the committee, Mr. Lucky Eyis Amiwero has alleged suspected sabotage to the reports.

Amiwero who is also the president of the factionalized Council of Managing Directors of License Customs Agent, revealed this fact yesterday in Lagos while receiving the Commissioner of Police in charge of the ports, Mr. Charles Abutu who paid a familiarization visit to the association’s secretariat in Apapa, Lagos.
Speaking, Amiwero said that “we have done our job, finished our recommendation, but there are still some very strong pressures not to implement the reform” 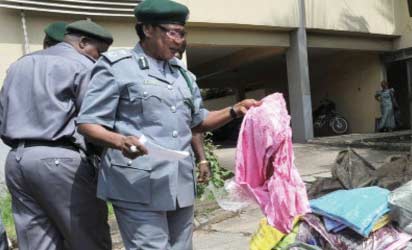 According to him, if the reports are carried out, it will reduce the cost of doing business at the ports and it will also attract foreign direct investment into the economy, he said that these are the things that his association; NCMDLCA stands for, “we stand to see how we can minimize cost at the ports., we are quite different, you don’t see us at the ports behaving like other agents”

The embattled council president also said that the body is set to write a petition paper to President Goodluck Jonathan for him to take a second look at the nation’s port system and address the problems militating against it, especially the excesses of the terminal operators and shipping companies as it hinders trade facilitation.“We have a lot of problems in the port, we notice that the shipping companies are not regulated, the terminal operators has nobody controlling them even though the minister says they should be regulated, all these things are affecting the agents because we are at the receiving end, we want to alert the government about the deficiencies we have in the whole process”

“For me, the council of managing directors is recognized, organized, perfected and we have been changing policies which other associations cannot do, we are not touts, what we have here are managing directors of companies, we are a body that stands for professionalism” he informed the commissioner.

The association members also took turns to analyze the difficulties encountered at the different ports in Lagos in the cause of doing their business, particularly the untutored behavior of truck drivers who disturb the free flow of traffic in and outside the ports.

Responding, the police commissioner, Mr. Charles Abutu said that his visit to the associations’ secretariat is to cement the relationship between it and the police. He commended the leadership of the council for their focus and “trying to make sure that round pegs are in round holes.

He however assured the association of the full corporation of the police force in checkmating illegalities at the port and urged them, saying “any information you have concerning suspicious activities at the port, you can give to us and we will act on it”