Siemens to boost power transmission in England by 2200MW

Siemens, a major player in Nigeria power sector have taken a giant stride to boost power transmission capacity between England and Scotland.

In a consortium with the Milan-based leading cable company Prysmian, Siemens Energy is to build a submarine DC interconnector in the Irish Sea.

The order is worth more than 1.1 billion euros for the consortium. Customers are the British grid operator National Grid Electricity Transmission (NGET) and its Scottish counterpart Scottish Power Transmission (SPT), which founded the special-purpose joint venture NGET/SPT Upgrades Ltd. for this grid expansion project. 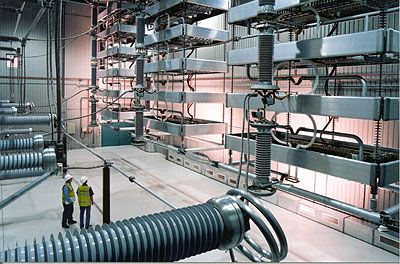 The grid connection between Scotland and England, designed as a low-loss high-voltage direct-current (HVDC) transmission system, will have a rating of 2200 megawatts (MW). It will be the first submarine interconnector ever using a DC voltage level of 600 kilovolts (kV). The highest voltage level used to date was 500 kV.

The Western HVDC Link project will provide much needed additional power transmission capacity on Britain’s transmission system as the UK heads toward a low carbon economy. The power link will help to balance supply and demand within the grid sections in light of the continued growth of remote and fluctuating renewables.

The link is scheduled to be operational by late 2015.
Chief Executive Officer of the Power Transmission Division of Siemens Energy, Udo Niehage said “This order to connect National Grid’s and Scottish Power’s transmission networks underscores our technological leadership in the HVDC field by using the as yet unrivaled voltage level of 600 kilovolts for a submarine interconnector with an also unmatched transmission capacity of 2200 megawatts”.

He also noted that raising the voltage level in the cable by 20 percent also enhances its transmission capacity by one-fifth.

Higher voltage levels in the cables allow higher power transmission capacity with the same diameter of copper in the cable and thus reduce the cost of material used. They also mean lower transmission losses. The total power loss in the link, caused by the two conversions – from AC to DC and back to AC – as well as by the ohmic resistance of the cables will be less than 3 percent.

The consortium comprising Siemens and Prysmian is responsible for turnkey supply of the link. This includes coordination and logistics efforts for cable installation along the 420-km-long route and HVDC converters in Hunterston, Scotland and the Wirral area in North West England.

The 400-kV alternating current used in the transmission grids will be converted into direct current in the Siemens HVDC converter stations. The electric power will be transmitted between these stations at a voltage of ±600 kV via a submarine high-voltage cable supplied by Prysmian and reconverted to AC for further transmission and distribution. The link can transmit energy in both directions, north and south.

HVDC is the only viable solution for economical, low-loss transmission of power via cable over distances in excess of 80 kilometers, because in an alternating current cable of that length a large part of the electrical energy transmitted would be lost in the form of reactive power.

Energy-efficient grid HVDC transmission technology is part of Siemens’ Environmental Portfolio.
The Siemens Energy Sector is the world’s leading supplier of a complete spectrum of products, services and solutions for power generation in thermal power plants and using renewables, power transmission in grids and for the extraction, processing and transport of oil and gas.