LAGOS-Schneider Electric, A Major operator in Nigeria’s power sector, and a global specialist in energy management has partnered the Rivers state government by signing an energy management contract valued at N4.2 billion or €20million. 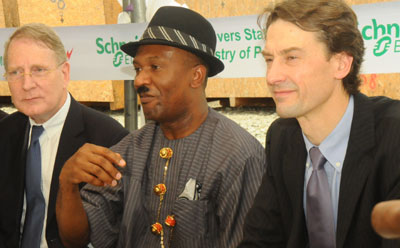 The contract which has an implementation deadline of June 30, 2012 is expected to improve tremendously the electricity supply within the state and its environs.

By this contract, Schneider Electric is expected to design, manufacture, and supply 28 units of 15MVA  33/11KV injection substations for the state.

Before the latest contract, Schneider Electric had also been charged with the responsibility of providing audit, installation, supervision and commissioning of 6 132/33KV transmission substations in Andoni, Ahoada, Emohua, Degema, Trans-Amadi, Ogu and Kaa. The value of the contract is €8 million (about N1.71 billion).

By this development, Schneider Electric will leverage its demonstrable capacity in the global energy solution provision on power distribution.

Speaking at the contract-signing ceremony, the Commissioner for Power, Rivers State Hon. Augustine Wokocha, revealed that the decision to work with Schneider Electric was informed by the company’s track record as the leading provider of innovative power solutions. He also disclosed that the award of the contracts was a demonstration of the commitment of the Governor Rotimi Amaechi’s led administration to meet the electricity needs of residents of the state.

As part of the contractual agreement, Schneider Electric is to organize overseas training as well as on-site training for the state’s technical staff that would later be responsible for daily running and maintenance of the facilities. In the words of the commissioner, these training programmes would help in the transfer of expertise towards ensuring the sustainability and maintenance of the projects.

Besides, the commissioner disclosed that Schneider Electric will set up a service centre and a workshop as part of the terms of the contract.  The service centre will upon completion be a full-fledged workshop for the manufacturing of low voltage equipment, transformer control panels for substation automation but most importantly, to conduct a full sample test of all the substation equipment to check their operational ability and full configuration, check quality and trouble shoot before deploying to site.

Profile of the Ministry of Power, Rivers State

The Ministry of Power is the key agency responsible for developing and executing policies of the Rivers State Government in the power sector. Our vision is to have a state where electric power is available, reliable and affordable in every nook and cranny. Pursuant to this, we have set out on a mission to ensure that Rivers State meets its energy needs through a sustainable framework that will support the state’s economic growth and provide its citizenry with services that meets their expectations as a fast growing economy. Indeed, our mandate is to create an enabling environment for rapid industrial and economic regeneration through quality and uninterrupted electricity supply.

The commissioning of the Trans Amadi Phase 11 and the urgent repairs done to the units at Omoku Station by the present administration increased our generation capacity and output. The present administration also embarked on a new 180MW Gas Turbine Project at Afam (Phase 1) which is now completed. Moreover, an additional 180MW is planned for Afam as Phase 11 of the project to commence soon. See the tables for our present generation status:

Generation as we made it (Table 2)