LAGOS-Apparently determined to meet up with its N7billion monthly target, the Ports and Terminal Multipurpose Limited (PTML) command of the Nigerian Custom Service has reviewed the duty collected on vehicles imported through its terminal.

Sources confirmed to Biztellers in Lagos yesterday that the valuation unit of the command came out with the new tariff on Monday and that the duty payable on cars has shot up by 10%. 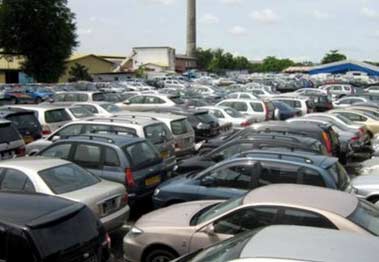 Managing Director of Mikkol Maritime Services Limited, Alhaji Abdulakeem Akanji who gave information on the development said that a car that they were clearing at N120,000 will now be cleared for N140,000.

Akanji said that the effect of this is going to tell on the importer and the end user of the vehicles.

He said that PTML had been the cheapest and most friendly port for the clearing of imported vehicles, but that with the new increase in duty, it is almost on the same level with the Tin Can port.

According to him, Nigerian Ports is at the treashold of favouring the economy of other neighboring countries at the expense of its own, he said that the developement might cause agents to advice their importers to make use of other neigbouring ports and bring in the vehicles through the borders at no cost.

Also speaking on the development, the BOT chairman of ANLCA, Aare Sanni Shittu explained that he has heard of the developement but that he is yet to confirm it.

However, when contacted, the Public Relations Officer of the PTML custom command, Barrister Chinedu Ogbonna denied knowledge of the issue saying that it is all speculation.

Barrister Ogbonna confirmed that the CAC of the PTML command had held a meeting yesterday morning with the chapter executives of the three major freight forwarding associations and that the issue of icrease in duty was not mentioned at the meeting.

According to him, the command yesterday held its usual stakeholders meeting with the clearing agents where issues bordering their minds are usually made known to the command, but that the issue of duty increase did not come up at the meeting.

But confirming the reasons for not disclosing the issue at the CAC’s meeting, the officer in charge of Ethics, Complains and Discipline under the National Association of Government Approved Freight Forwarders (NAGAFF) Mr. George Okafor explained that freight forwarders have other pressing matters on their minds to discuss and that this is why the issue did not come up.

Okafor confirmed that there has been an increase in duty but that it is very reasonable and very little and that freight forwarder did not mention it because they have high trust in the valuation officer of the command.

“We are still talking with the customs and this morning we held a meeting with the CAC, but the increase is not arbitrary, we know that PTML has been very calm and peaceful both in transaction and trade facilitation, it is only here that you can clear your vehicle under 24hours”

But he however confirmed that there has been a N10,000 increase in duty at the command but that the executives of the association did not discuss the issue with the CAC because they know that the valuation officer is capable to handle the situation.