LAGOS-Following last week’s pronouncement by the Presidential Monitoring Committee on Port Reforms that commencing from this week, container laden trucks will no longer be seen around Apapa Lagos and that they are to be reporting to the holding bays of shipping companies, there are indications that the statement is just a flash-in-the-pan as the truck drivers have said that they are not aware of the development and that the scheme cannot work.

According to the President of the Association of Maritime Truck Owners (AMARTO) Chief Remi Ogungbemi, the holding bays of the shipping companies which trucks are supposed to be going to are already filled to the brim. 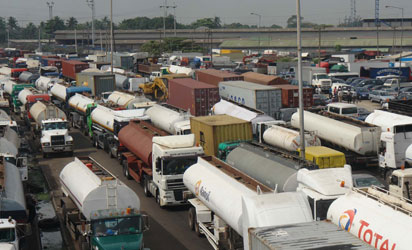 Speaking in Lagos yesterday, Chief Ogungbemi said that “most of the shipping companies have holding bays where containers are dropped, but the problem is that all these holding bays are filled to the brim and that is why you see so many trucks in Apapa”

“It is also wrong for containers to be dropped at the holding bays, most of these areas are residential areas, and it is going to have a negative effect on the lives of people living around these areas, for them to start seeing containers trucks moving around and causing traffic thereby disturbing their easy movement”

“Containers are supposed to be dropped directly at the port because the containers are going to be returned to its origin through the ship, so it is wrong for them to be taken to holding bays”

“I attended one of the committees’ meetings and I told them then that the scheme cannot work, I don’t see how it can work, but however, let us give majority opinion a trial”

Also speaking on the development, some of the truck drivers who are still parked on the Tin Can Island Bridge said that they have not yet been notified of any instruction not to come directly to the port.

One of them said that “we prefer going to the truck park which will be provided for us that for us to come here and spend 4 days on queue, but the problem is that these places are filled up already, I am suppose to drop my container at Ports and Cargo holding bay in Okota but the place is filled up” he said.

Another driver told explained that reason why they are still present at the port is because they have not been informed of the development and that some of the shipping companies have not yet acquired a place that can be used as holding bay.