LONDON-The Nigerian Government and General Electric (GE) has signed a Memorandum of Understanding, MoU, for a $10billion to be invested in various power plants with combined capacity of 10,000Megawatts, MW.

Nigeria insisted that the cost has not been padded or inflated in any way since  it costs $100million to generate 1,000MW of electricity globally 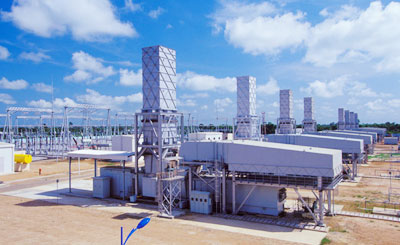 There had hitherto been an erroneous media report that GE was constructing a 10,000MW plant in Nigeria.

But at the agreement signing at the Nigerian High Commission in London, Nigeria’s Minister of Power, Professor Barth Nnaji, told journalists that GE only agreed to take up at least 15% equity in each of the plants to be constructed.

He said that GE’s support is the highest expression of investment support for government’s target to achieve 40,000MW generation capacity by 2020.

He argued, “To have a company willing to work with us on delivering 10,000MW is a show of confidence in Mr President’s vision.

“Even if the equity is one percent, it is still significant because it will take us somewhere. And with 15%, Federal Government will provide the balance.”

He, however, clarified that government will not be involved in any of the projects, but will provide guarantees for the private sector participants.

According to him, “The Local content will be huge power because GE and any other foreign investor must have local partners.”

He explained that what government and GE had signed after a meeting with President Goodluck Jonathan in Abuja, was a series of general agreements for support in various sectors of the economy including power, transportation especially rail, and health.

“What we are doing today is the culmination of a series of work done, some behind the scenes, and some in the open. With the meeting between President Jonathan and the Chairman of GE last month in Abuja, there was a narrowing of areas of focus for the country and GE to collaborate on specific areas of focus.

“Accordingly, GE developed MoUs specific to the various sectors, and today, the MoU we are signing relates to power alone.”

Agreeing that $10billion was very ambitious in the face of cash crunch at the international capital market, Nnaji argued that with GE’s cash and government’s bank guarantees, the projects will become much more bankable, as investors can approach financial institutions to raise funds.

He noted that the relationship between the Nigerian government and GE is a long term one, as the energy company has moved from just being a supplier of power equipments in Nigeria, to being an equity investor.

“The MoU creates a relationship that will allow GE to not just be selling turbines to Nigeria, but also have equity participation in collaboration with the government and private sector.”

Speaking on behalf of GE, its President, Sub Sahara Africa, Mr. Jay Wileman, said with the signing of the MoU, things can get rolling, as “now is the beginning of the real work of delivering power in Nigeria.”

He recalled that discussions with his company started as far back as 2009, but then realised that Nigeria required a different approach o meet its power needs leading to the ramp up of agreements.

With the MoU, he said Nigeria has become “the epicentre of GE’s focus and we will be bringing in our experience, and partners to demonstrate our capacity.”