The Oil block, Oil Mining Lease (OML 30) was sold to a British-Canadian Firm, Heritage Oil for $800 million even after an indigenous company Conoil had offered to pay $1.1 bilion for the said block. 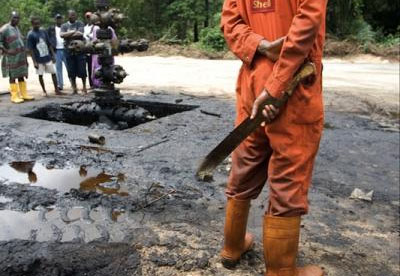 President Goodluck Jonathan is said to have used his high office to force through the deal, a move which did’nt go down well with the operator of the block Shell.

OML 30 is the most promising of the offshore acreage put on the auction block last year by the Anglo-Dutch major in the Niger Delta. Heritage had tried on several occasions in recent years to gain a foothold in Nigeria, to no avail.

The group finally offered $800 million for Shell’s 30%, Total’s 10% and ENI’s 5% on OML 30, in conjunction with the Nigerian firm Shoreline Energy headed by Kola Karim, a close ally and personal friend to President Jonathan.

Shell’s share on the concession was put up for sale early this year under the group’s divestment process but legal uncertainty about the transaction has prompted the firm which put in the highest bid, Nigeria’s Conoil, to back out. Other companies along with Heritage have stepped into the breach, among them Oryx Petroleum owned by Jean-Claude Gandur.

It was gathered that besides Kola Karim, among financial backers of Shoreline, which was initially interested in OML 40 before joining Heritage in bidding for OML 30, are figures very close to president Goodluck Jonathan.

But several questions have yet to be cleared up. After a bidding round last year Shell accepted an offer of $1.1 billion for the block from Conoil. But the deal fell apart and Conoil pulled out when the state-owned NPDC exercised its rights to become operator on OML 30.

It therefore came as a shock that Jonathan could clear the coast for the Heritage deal which is $300 million below what Conoil had offered for the oil bloc.

The problem, however, is that even though other buyers of Shell’s acreage in the Niger Delta could not become operators as they had expected, they were obliged by Shell to pay the full price they originally offered. But some details of the transaction have yet to be settled.

The first problem is Conoil’s down payment. On submitting its bid to Shell, Conoil deposited 10% of the money – or $120 million – in an escrow account, in compliance with specifications.

After pulling out in the interval, it now wants its money back, arguing that the rules of the game changed during the tender and that NPDC was determined to retain the role of operator. Up to now, Shell has turned a deaf ear to its arguments and Conoil hasn’t recovered its $120 million.

Up to now, only the Nigerian concern Seplat (in which France’s Maurel & Prom owns 45%) has succeeded in penning a definitive agreement on the purchase of Shell’s shares in onshore permits in the Delta.

Negotiations with all other potential buyers have bitten the dust or been complicated by the wish of government-controlled NPDC to exercise its right of first refusal on the blocks or take over the role of operator.

For instance, Afren, which has been negotiating since the spring to buy Shell’s share on OML 26 and become operator of the field, was recently informed by mail that NPDC, which also holds a stake on OML 26, would act as operator. As a result, Afren would have no say in decisions regarding the block’s development.