Nigeria to focus on value-chain in mineral sector development

By Joseph Bamidele
ABUJA – The Federal Government of Nigeria has announced that its focus in the development of the mining and minerals sector is now aimed at building the value chain in order to enhance profitability for operators and create wealth in the economy.
It further reaffirmed its determination to enhance human capital development for the sustainable growth and development of the nation’s minerals and metal sector. 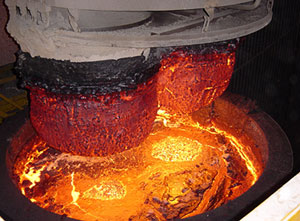 Minister in charge of Mines and Steel development, Arc. Musa Mohammed Sada dropped the hint while receiving the High Commissioner of Rwanda to Nigeria, Ambassador Joseph Habineza in his office in Abuja, he noted that the present administration had made human capital development a major factor in its transformation agenda for the industrial development of Nigeria.

“The major issue we have is that of knowledge, we have the raw materials unless we have the knowledge, we cannot produce sophisticated products. This is why human capital development needs to be highly considered in the way we do things.”
The minister said government was working assiduously at building human capacity in the mining operations of the country, noting that, the establishment of the Nigerian Mining and Geosciences Institutes in Jos, National Metallurgical Training Institute, Onitsha  among others was borne out of the need to enhance human capital development in the sector.
He explained that those institutes afforded mining operators the opportunity to gain practical experiences in mining.
Arc. Sada who noted common problems militating against the sustainable development of mineral resources in the African continent, expressed the need for mining institutions to collaborate so as to move the sector forward.
In his words “We have all along been thinking on the need for us in Africa to work together because of certain common problems  that we seem to be having more especially in the extractive industry.”
He lamented that the country with its vast mineral resources could not boast of any value addition to the resources saying that, “What it means is that people just dig up and go away and the jobs and the value addition are provided there, by the time the same products come back again to us we pay dearly for it, we found that the money received from raw materials is not enough to purchase those finished products for us.”
He disclosed that efforts are in top gear to evolve a mining regime within the Economic Community of West African Countries (ECOWAS) towards the development of the solid minerals sector.
The minister said government was already partnering with development partners such as Standard Bank which is one of the largest mining promoting banks in the world on the need for a mining forum whereby relevant stakeholders in the minerals and metal sector come together and brainstorm for the growth of the sector.
He said “The whole idea is to see to the development of mining corridors in the African continent where we develop industries and processing plants based on the amount and type of minerals that we have.”
Arc. Sada expressed appreciation for the visit of the delegation, adding that Nigeria would have a lot to learn from the country of Rwanda in terms of mineral development.
He extended a hand of fellowship to the government of Rwanda and expressed the ministry’s readiness to collaborate with other African countries for the development of the solid minerals sector.
Earlier in his remarks, the Rwandan High Commissioner to Nigeria and leader of the delegation, Amb. Joseph Habineza said the mission of their visit was to explore areas of cooperation with the Nigeria’s ministry of mines and steel development with a view to achieving sustainable development of the mineral resources in the African continent.
Amb. Habineza said Nigeria with the crops of highly skilled human resources, had a lot of experience in mining that Rwanda could learn from.
He said there was the need for the African continent to work towards value addition to their mineral resources in order to move the sector forward.