LAGOS-THE Nigerian Deposit Insurance Corporation (NDIC) has announced a total payment of N3 billion out of N5 billion owed depositors of the distressed Micro-Finance Banks  in the country whose licenses were withdrawn in 2010 by the Central Bank of Nigeria (CBN), the Managing Director of NDIC, Alhaji Umaru Ibrahim, has said. 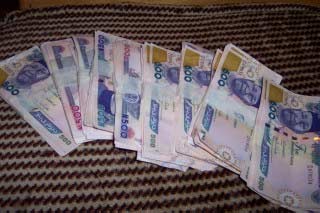 Ibrahim who made the disclosure in a media parley in Lagos, stated that the agency has launched investigation into the N7 billion loans owed the MFBs, saying it is doing everything possible to recover the loans.

According to him, part of efforts being made towards the loan recovery was the investigation of activities of various individuals that contributed to the fall of those MFBS, even as he said that the agency would prosecute any body found culpable of taking un-repaid loans from any of those banks.

“The crucial thing is that we are trying to bring to book the directors, employees and any other player of the Micro-Finance Banks that contributed to the downfall of the MFBs. This is where some insiders- directors, managers, employees- abused their positions by regularly taking loans without repaying them. These are the kind of cases we refer to the Financial and Malpractices Investigation Unit, FMIU,” he explained.

“What we did was that we made public announcement nationwide through the media and called on depositors of the Micro-Finance Banks to fill their names with the agent banks. We were involved in the verification exercise and payment at the initial stage, but we later withdrew and left the assignment to the agent banks.”

He noted that the NDIC would in the course of the year conduct on sight inspection of 250 MFBs in the country.

He posited that the country cannot achieve the dream of having a wholesome financial system if individuals that defraud the banking system are allowed to walk away free.

Earlier in his welcome address, the Commissioner of Police of the Special fraud Unit, NDIC, Mr.Tunde Ogunsakin, pledged to ensure that all cases of fraud brought before it by the NDIC, especially as regard the MFBs, were thoroughly investigated and all defaulters brought to book.

“On the Micro-Finance banks the MD talked about, I want to assure you that we will do everything possible to ensure that all cases brought before the SFU are well investigated. We are already putting measures to that effect,” he assured.

“The Special Fraud Unit is going to be proactive in trying to detect crime before the damage is done with the gracious approval of the inspector-General of Police. An intelligent section is being set up to support on-going investigation to reinforce strategic decisions and will be used for basis for initiating a criminal investigation as unravelling major fraud involves thorough investigation which will intelligence will aid,” he further assured.

Speaking further, he said, “you will never stop all crime before it happened but you can potentially stop crime earlier if we can intervene earlier, we can certainly reduce the impact of losses, particularly, the financial issues.”