LAGOS-As part of efforts to enhance trade facilitation which is one of its core functions, the Nigerian Shippers Council has partnered with the Maritime Arbitrators Association of Nigeria (MAAN) to enlighten stakeholders and operators in the maritime sector on alternative resolution of disputes in the sector through its upcoming 4th maritime dispute seminar. 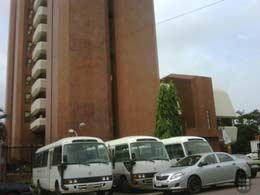 While receiving the executives of the Maritime Arbitrators Association of Nigeria led by its president, Chief Gbola Akinola, who paid a courtesy visit to his office in Lagos last week, the Executive Secretary of the Nigerian Shippers Council, Captain Adamu Biu explained that most business men in the maritime industry does not have full knowledge of arbitration as a way or solving dispute, and that the council will partner the association to enlighten the people.

Speaking, Captain Biu explained that the synergy with the association will further enhance the position of the Council in trying to attain the status of a commercial regulator.

“You know there is no commercial regulator in the system now, we are the only one with the semblance of commercial regulator, and what is required is for our enabling Act to be amended, retouched or brushed up here and there, we may not have 100 percent of the expertise, but I can assure you that we have more than 80percent of the expertise to do it, so it is easier if it’s done this way and this is one step towards achieving that regulatory function of the shippers council”

“You must understand the function of Shippers Council, one of our functions is trade facilitation, and this is one of the best ways to facilitate trade, if you remove dispute or shorten the process of resolution of dispute, then you are facilitating trade because you are fastening the process” he said.

Captain Biu assured the association of the council’s full support towards its upcoming maritime dispute seminar which is billed to hold on the 23rd and 24th of May 2012 and also use it as avenue to encourage practitioners in the maritime industry.

Speaking earlier, the President of the association, Chief Gbola Akinola had explained that the purpose of the curtsey visit was to appreciate the Nigerian Shippers Council its support and collaboration with the association over the years, and to also ask for its continued support in this year.

Chief Akinola pointed out that the shippers council plays a pivotal role in the affairs of maritime industry and that the association wants to continue with them so that the synergy will further develop the economy as well as for the development of the maritime sector.

“We are here to say thank you to our collaborators because over the years the shippers council has always been supporting us anytime we hold our maritime dispute seminars, the fourth in the series is coming up on the 23rd of May 2012 and of course we are looking forward to continued participation of the shippers council and their continued support, so it is the main reason why we are here” Chief Gbola explained.