Workers challenge Nigerian government over $8b investment in NIPP

…Says amount can not generate 60,000 Mw
By Joseph BAMIDELE
LAGOS-The National Union of Electricity Employee, NUEE, has described the $8 billion invested in Nigeria’s National Independent Power Project, NIPP as inadequate for the power sector to generate 60,000 megawatt.
The General Secretary of NUEE, Joseph Ajaero said “if the country is currently not generating any electricity, the $8 billion invested in the NIPP is not enough to generate 60,000 megawatt because the country’s current demand for electricity is above 30, 000mw” 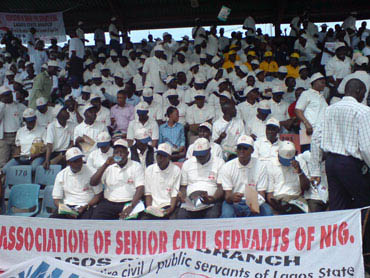 Ajaero made this known in Lagos recently during scheduled visit to select media Houses in Lagos along with members of Senior Staff Association of Electricity and Allied Companies adding that the current system collapse in the country was as a result of lack of management in the country’s power plant by the Federal government.
He said “The transmission lines are so weak that they are not capable of conveying electricity to our homes.
“Instead of maintaining the transmission lines and replacing old transformers, the Minister of power, Prof. Bath Nnaji sacked three senior PHCN officials whose duties had nothing to do with power generation, transmission and distribution”
He reiterated that if the power plants had undergone turn around maintenance over the years, the country will experience constant power supply.
“For more than 40 years, none of the power plant has undergone a robust turn around maintenance, if they have been well maintained there will be constant power supply.
“We have what is called water management. When water is in its peak, you make use of hydro power plant to generate power while gas power plant will be maintained. When the gas plant runs short of gas then the hydro power plant will be used to generate electricity.
He also noted that during election period, Kainji-dam was over flogged which led to the frequent system collapse.
“When you over flog the system today, you will pay for it tomorrow. The federal government over flogged the system during election period to give Nigerians the impression that there will be constant power supply when the present government comes into power” he said.
The NUEE general secretary urged the minister to ensure that there is adequate power supply in the country and allow the Bureau of Public Enterprise, BPE to pursue the course of privatization of the power sector.
“The issue of privatization is not the job of the minister. It is the job of BPE and the minister is to ensure that there is adequate power supply.
Addressing the staff welfare, Ajaero noted that in the 2012 budget, no provision was made for the settlement of entitlement for PHCN workers.
“When you take a close look at the 2012 budget there is no provision for the settlement of PHCN staff entitlement. What this underscores is that they want us to experience what workers in the telecom and aviation sector suffered when those sector was privatized in a rush.
“But what we are being told is that when the private sector takes over the various companies, we will automatically become their staff, but that is not possible.
“You cannot transfer public employment to private employment, what needs to be done is that we have to terminate our appointment first with the public sector and receive our entitlement then if the company coming to take over says he needs our services then will open a new chapter with him, that is how it should be done” he said.
He also debunked the minister’s view that PHCN union members are the clog in the wheel of progress in the power sector.
“The three people that the minister sacked were  the GM Human Resources the Market Operator and the CEO Transmission. The minister said it was these people who were sabotaging the power situation in the country. But these sacked individual jobs had nothing to do with power generation as at that moment.
It will be recalled that the minister had earlier sacked three PHCN top CEO for allegedly sabotaging government effort to privatize the sector and to ensure stable power supply.