Demuren who made this known to the Senate Committee on Aviation’s Public Hearing on Violation of Aviation Laws and Practice by Foreign Airlines, affirmed that it was not only the passengers that were been exploited noting that even the Federal Government had lost so much revenue through the alleged conduct of British Airways and Virgin Atlantic Airways. 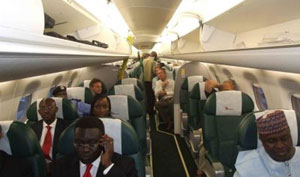 Dr. Demuren further said that Nigerian Civil Aviation Authority (NCAA) findings  reveals that there was no valuable reason given by BA, VAA to support their arbitrary fares between Nigeria and UK, especially in the premium classes of travel.

According to him,”The fares charged had become arbitrary, abusive and severely exploitative were not just a reasonable conclusion, it was the only plausible conclusion.  To date, NCAA has not found any distinguishing factor in the Nigerian market from other markets that supports or justifies the incredulous disparity in fares between other destinations with some or a combination of similar features”

The NCAA DG further pointed out that BA, VAA were at fault as they were responsible for creating regional imbalance in Nigerian adding that they only sell seats with high fare rate in Nigeria as compared to other neighboring West African countries on the same routes like Ghana and so on.

“The lower fare seats were either rare or non-existent for purchase from Nigeria quite differently from the case to Boston or New York. This is consistent with NCAA discovery.  Airlines are required to periodically file tariffs with the NCAA.  A check of the NCAA records and testimony from travel agents clearly demonstrate that BA and VAA repeatedly and routinely deceived and misled NCAA and consumers to believe that some of the fares displayed and disclosed were in fact available when that was not the case.  Comparing the information in the filed tariffs with actual sales confirm that the lower fares were not only unavailable, it was clear that some of them were never intended to be available”

“Whichever way it was, it was clear that both BA and VAA discriminated and still discriminate against consumers in Nigeria in pricing. Further, the Passenger Fuel Surcharge remains a smoke screen and a baseless imposition on Nigerian consumers” Demuren added.

He however said that NCAA believes that Nigeria passengers must receive the best possible service and treatment, and at a fair and equitable price.