There are strong indications that the Nigerian Custom Service may have been forced to backout from further implementation of the controversial benchmark on cargoes, even as it was gathered that the service is not happy about cancelling the scheme and is now set to go all out to deal mercilessly with non-compliant importers and their agents. 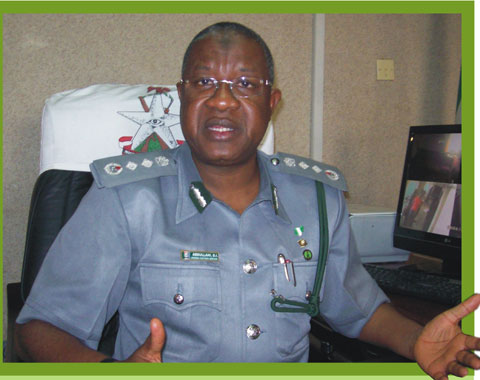 It was gathered that the decision of the custom to cancel the benchmark came on the heels of a letter that was written to President Goodluck Jonathan by a frontline maritime expert and consultant on custom matters.

Biztellers however gathered that the presidency had ordered the Nigerian Custom Service to stop forthwith the implementation of custom benchmark but that henceforth, the custom will no longer compromise in implementing section 46 and 47 of the Customs and Excise Management Act (CEMA)

According to a source, going by the section 46 and 47 of the CEMA, “if you conceal, if you falsely declare or under-value or make wrong description of import, the altimate is the seizure of such consignment and prosecution of offenders, if you are found guilty it is five years with no option of fine” the source said.

Reacting to this development in Lagos yesterday, the founder of the National Association of Government Approved Freight Forwarders (NAGAFF) Dr. Boniface Aniebonam condemmed the cancellation of the custom benchmark, saying that it is a scheme that was put in place by custom to assist clearing agents and their importers.

According to Aniebonam, a reasonable and responsible person that is knowlegeable will not be happy because it is a provision that the custom have made to ameliorate or to assist the importer instead of evoking the altimate power to seize and prosecute.

I understand that one of us wrote a petision to the president and he copied various government agencies and saying that customs is benchmarking imports into Nigeria, this shows the little knowlege he has because there was nothing like that, it is just a platform that the custom has put in place to deter people from making ingenuine declarations” Aniebonam stressed.

Aniebonam mentained that the CEMA law is superior to the import guideline because it is an extant law,therefore the application of the section becomes pertinent.

“From what i got, the government has now given custom the directive to go ahead in line with the transformation of the present administration to enforce the law, so where are we now, who is going to loose, who is loosing and who is going to blink first?” He said.

“Those that are involved in this frivolous competition, hw many containers do they clear out of the port, are they really involved in cargo movement? One of them that was profiled cleared only 2 vehicles throghout 2011”

He faulted claims that importers have neglected Nigeria and have diverted to neighboring countries saying that genuine importers are still carrying out their business at the Nigerian ports.