For the second year running, Dangote Cement Plc has maintained its leadership position as the Biggest Quoted Company in West Africa.

According to the latest ranking by London-based African Business Magazine, which publishes an annual list of Africa’s Top 250 Companies, Dangote Cement occupied the first position in West Africa with a market capitalisation of $10.5billion, followed by AngloGold Ashanti of Ghana ($5.45billion), and Nigerian Breweries Plc ($4.39billion). 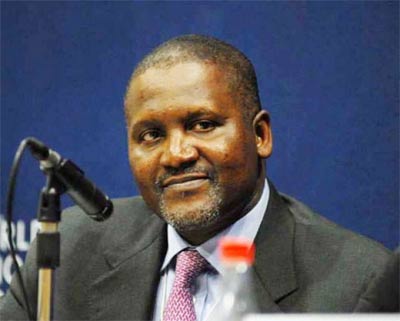 “Most of the biggest companies in West Africa are Nigerian,” the report said. “Dangote Cement retains the top spot in the region with a value of $10.5bn, down from $12.2bn last year, while even mining giant Anglogold Ashanti has suffered a fall in value from $6bn to $5.4bn.”

The drop in value, the report noted, was a global phenomenon, as the combined value of the Top 250 Companies in Africa, shrank from $848billion the previous year, to $652billion in the period under review. However, despite dropping in value from $99.4billion to $71.5billion, South African mining giant, BHP Billiton, remains Africa’s biggest quoted company, while Anglo American, another mining company, and SABMiller both of South Africa, came second and third with values of $54billion and $35billion, respectively. “Fears of a double-dip recession in the industrialised world are partly to blame, but ongoing insecurity in Nigeria and political winds of change in North Africa have also depressed share prices in those markets,” the report added.

The report noted that Dangote Cement commissioned its third cement plant in Nigeria with a capacity of 6.0 million metric tonnes per annum this February, adding that it retained its position as the 15th Biggest Quoted Company in Africa, same as last year.

During the commissioning of the new cement plant at Ibese in Ogun State, the President/Chief Executive, Dangote Group, Aliko Dangote had said: “In line with our long-term vision to be the number one cement producer in the world, we have embarked on a Pan-African expansion drive. We are currently building new cement plants and setting up terminals in 14 African countries. We envisage that by the time we complete all these projects, we will be in a position to produce about 60 million metric tonnes per annum of cement by the end of 2014. This will place us among the top eight cement producing companies in the world.”

Dangote, who recently outlined his long-term vision for the Group, had indicated interest in diversifying the business further into infrastructure, mining, and petrochemicals, while expressing his desire to relinquish his stake in some of his subsidiaries.