The rate at which prices of goods and services increased, inflation rate, rose by 12.1 per cent in March, says National Bureau of Statistics.

In a statement issued yesterday, the Bureau attributed the increase in the inflation rate to increased food prices. 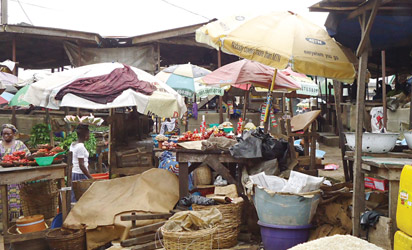 It said, “ The Composite Consumer Price Index which measures inflation rose to 12.1 percent year-on-year in March 2012. This figure is 0.2 percentage points higher than 11.9 percent recorded in the previous month. The monthly composite CPI was higher by 1.6 percent when compared with February 2012.

“The increase in the headline index, composed of the core and food indices, partially was due to the planting season which increased the price of food products in the market, and an increase in prices in the economy. However, this was moderated by lack of liquidity in the economy due to the delay in the monthly FAAC.

“In March, the level of the Composite Food Index was higher than the corresponding level a year ago by 11.8 percent. This was higher than 9.7 percent recorded in the previous month. Compared with February 2012 figure, average monthly food prices rose in March 2012 by 2.3 percent. The rise in the food inflation was mainly due to the increasing cost of food products especially yams and other tubers as food products have become relatively scarce due to the drawdown from the end of year harvest. The average annual rate of rise of the index was 10.3 percent (year-on-year) for the twelve-month period ending March 2012.

“The “All items less Farm Produce” index which excludes the prices of volatile agricultural products rose by 15.0 percent year-on-year, while the average 12 month annual rate of rise of the index was 12.1 percent for the twelve-month period ending February 2012. On a month-on-month basis, the core index increased by 4.5 percent in March 2012.