Net income rose to 24.5 billion naira ($155.7 million) in the three months through March from 12.2 billion naira a year earlier, the Lagos-based lender said in a statement today on the website of the Nigerian Stock Exchange. Revenue climbed to 92.3 billion naira from 64.8 billion naira. 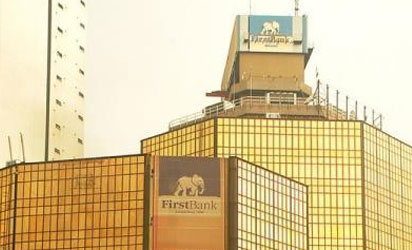 “A good set of numbers which follows the general trend that has been prevalent to date,” Securities Africa, a Johannesburg-based brokerage, wrote in an e-mailed note to clients today.

First Bank, which in October agreed to buy Congo’s Banque Internationale de Credit, is looking to acquire another lender this year in West Africa, Chief Financial Officer Adebayo Adelabu said April 18. It also wants to add 120 branches in Nigeria to a total of 750, he said.

First Bank’s shares jumped 4.9 percent to 10.47 naira at the 2:30 p.m. close in Lagos, the commercial capital. The stock has gained 18 percent this year, compared with the 21 rise of the Bloomberg NSE Banking Index (NGSEB10), which tracks the performance of Nigeria’s 10 biggest banks.

Nigeria’s naira is heading for a week high against the dollar as the country’s foreign reserves increase, adding to confidence that the central bank can maintain currency stability.

The naira strengthened 0.1 percent to 157.32 per dollar as of 11:29 a.m. in Lagos, the commercial capital. The currency has advanced 3.2 percent this year versus the dollar.

The foreign currency reserves of Nigeria, Africa’s biggest oil producer, have advanced 11 percent this year to $36.5 billion, according to April 27 central bank data, as the government partially reduced a fuel subsidy in January and as the West African nation’s benchmark Bonny Light crude gained 9 percent over the same period.

“The partial removal of the subsidy partly explains the $4.1 billion increase in foreign reserves year-to-date to $36.5 billion and naira stability, compared with 2011’s depreciation trend,” Yvonne Mhango, an economist at Renaissance Capital in Johannesburg, wrote in a note to clients today.