153 die in plane crash in Nigeria

A Dana air plane, a McDonnell Douglas MD-83 has crashed into some residential buildings at the Iju-Ishaga area of Lagos State killing all 153 passengers onboard.

Some of the passengers identified were one Major General, Tahir Umar, Major IG Muhammed, Lt.Col Chumbo Ochigbo, Mr. Livi Ajounuma and other passengers were amongst the dead victims. 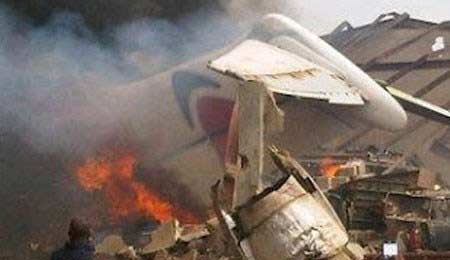 The plane was said to have hit a two-storey building, state emergency official Femi Oke-Osanyinpolu said according to AP news.

Speaking on the crash, the Minister of Aviation, Princes Stella Oduah said that her heart goes out to the families of those that lost their loves ones on the flight stressing that Federal Government would embark on a full scale investigation into the accident in order to prevent a similar occurrence in the future.

She said”Today Sunday, June 3rd 2012 at 3:43pm local time, Dana Air flight 0992 from Abuja to Lagos declared an emergency with the Lagos control tower at 11 nautical miles to Murtala Muhammed Airport  Lagos. A minute later the aircraft disappeared from the Air Traffic Control radar. The flight was found to have crashed into residents buildings at Iju Ishaga area of Agege with 153 people onboard”

“Our heart and prayers go out to the families of the passengers and the people on the ground who lost their lives in this tragedy”.