LAGOS-FOLLOWING the crash of a Nigerian domestic aircraft operated by Dana Airline which claimed the lives of all the over 150 people on board last sunday in Lagos, a staff of the Aviation company who pleaded annonymity has accused the Airline company of mass murder over the disaster.

The female staff who made the allegation via a live telephone call to Channels television in Lagos disclosed that the ill-fated Aircraft had been faulty long before it finally killed hundreds of people last Sunday.

According to her the Aircraft Mcdonell 83 with registration number 5N-RAM had history of technical problems which both management of the airlines as well as regulatory agencies not unaware of. she stated further that on day that the plane crashed it never should have left Lagos due to technical issues but that shortly after it left Lagos it had to stop in Calabar due to faults and that after some checks and repair work it ought to have been brought back to Lagos for further repair but that in an effort to maximise profit the Indian owners of the Airline insited it must go get passengers from Abuja and these passengers, 153 of them along with the crew members never got to Lagos.

She also cited the case of landing gear problem which occurred in Uyo, the Akwa Ibom state capital some few weeks earlier which saw the same Mcdonell Aircraft waiting on ground for 6 hours to receive technical attention after which it went to Abuja and could not return to Lagos due to another another fault.

Some Aviation industry observers who spoke with our correspondent in Lagos following the development however put the blame on the doorsteps of the government saying that if regulatory policies are strictly and religiously adhered to then cases of sharp practices in very sensitive sectors like aviation where a little mistake could result to loss of lives would be drastically reduced if not totally avoided.

“Hence we are calling for a thorough investigation on this ugly and avoidable development and all those found liable should be charged for murder, sacked or operational licenses withdrawn before being sentenced, as this would serve as a deterrent against profit conscious investors who care little about the lives or safety of the Nigerian people. This sort of loss should be avoi 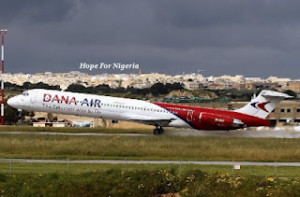 ded at all cost as we cant afford it as a nation.”  they enthused.