The Nigerian government has said that it has withdrawn the operating  license of Dana Air, the owner of the ill-fated plane that crashed into a two storey building in Iju-Shaga, Lagos killing all 153 passengers onboard. 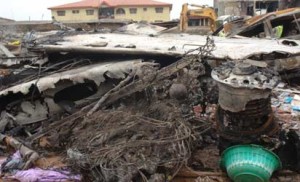 The Nigerian government further noted that the airline licence has been suspended indefinitely for it’s  negligence that resulted in the death of the passengers it was carrying.

Confirming the ban of the airline from operations, special Adviser to the Aviation Minister on Media, Mr. Joe Obi said the airline has been “suspended for safety operational reasons”

Meanwhile indications emerged that the Director General of the Nigeria Civil Aviation Authority, Dr Olusegun Harold Demuren has been asked to step aside by the senate.

The recommendation came following preliminary deliberation on the floor of the senate in the upper chamber of the National Assembly.

The Senate committee chairman on aviation, Hope Uzodinma while on a visit to the site of the incident on Monday in company of the
president Goodluck Jonathan said “we have come, we have seen, we condole the government and people of Nigeria for this strong tragedy that has happened and we are sure that we must also learn lessons from
this incident.”

Uzodinma told the president that “The government will be supported by the parliament, we are going to look into the immediate and the remote causes of this incident and see how best to strengthened the aviation sector in Nigeria and ensure that there will be no repeat occurrences. I want to implore all of us to take heart and continue to pray to Almighty God who is the author of everything
in life, I am sure that we will get through this.”