The interest rate charged by Nigerian banks are not conducive for the survival of businesses, says , Dr. (Mrs.) Ngozi Okonjo-Iweala,  Coordinating Minister for the Economy and Minister of Finance.

“We really need to look at our banking sector again. I think the interest rates being charged by banks in this economy are too high. There is no way businesses can survive with this kind of approach and I wonder what is behind these rates, because the banks are now strongly capitalised”,  she said in Lagos at a Consolidative Forum  on Budget 2013 with private sector operators and civil societies organisations . 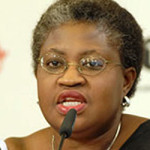 Data from the Financial Market Dealers Association of Nigeria (FMDA) shows that as at July 9th, average lending rate by banks for normal customers was 20 per cent and 18 per cent for prime customers.

These, participants at the meeting said were too and wanted government to intervene.

Okonjo in her response agreed with the participants that the interest rates are indeed high. She said, “They  (the banks) have one of the best Capital Adequacy ratios in the world, non performing loans, below five per cent, thanks to the work that was done be Central Bank of Nigeria. So, what is the issue? How do we get these banks to be developmental in their approach so that they can support small and medium enterprises? We are going to look into that because I think that interest rates in the economy are too high.”

Participants at the Forum also criticised government borrowing activities, which they said is denying the private sector of loans for investment.  Okonjo-Iweala acknowledged that indeed the government borrowing from banks is posing a threat to the economy. She said that the federal government has already taken steps to reduce borrowing from the banks. She said, “For 2011 budget, we borrowed N852 billion, we brought this down to N744 billion in 2012 budget and we are going to take it down in 2013 budget. What we are aiming at is to bring it down to a level of about N500 billion in the medium term.”