Apparently not satisfied with the manner with which container trucks going into the Nigerian Lagos seaports have jettisoned the Federal Government directive that all trucks should vacate the Apapa-Oshodi expressway, the National Union of Petroleum and Natural Gas Workers (NUPENG) has threatened that should government fail to call the container trucks to order, petroleum tanker drivers will also return back to the roads.

The chairman of the Lagos Zonal Office of NUPENG, Alhaji Nojeem Korodo made this threat in Lagos while speaking with Biztellers. 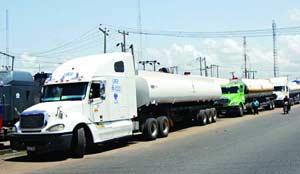 The NUPENG scribe pointed out that container laden trucks that were earlier ordered to leave the expressway by the combined team of the Presidential Monitoring Committee on Port Reform and the Lagos State Government have now returned back to the expressway and that the government is not doing anything to make them obey the directive earlier given.

“All the containers that were asked to leave the road they left at the same time with us, but now gradually they have returned back to the road and nothing is being done to this, they should not allow us to be provoked so that we will not go back to the road”

“If we want to fight on-behalf of our members nobody can stop us, we don’t even need to hide under any guise, we were all carried along before government asked all stakeholders both tanker owners, truck owners and articulated vehicles to vacate the road and we happen to be the first to vacate Lagos roads, and even till today we are still maintaining that, but we only have reservations because before this time we have let them know that a situation whereby they give a directive and we complied and yet others fail to comply and nothing is being done, then we will be forced to go back to the road” he threatened.

While reacting to the recent move by the Lagos State Government to pass a Bill at the National Assembly which seeks to restrict movement of trucks, especially container trucks from the hour of 6.am till 7pm, Korodo confirmed  that the preposition had been brought before the union and that it had restricted out rightly that it cannot subscribe to it.

He hinged the union refusal of its inclusion in the bill on the security challenge obtainable in the country. He lamented the high rate with which petroleum tankers are being high-jacked by highway robbers and the content will be diverted.

Speaking he said “in some of our meetings with the government, the issue of night movement has been brought before us, I specifically mentioned that there is no way that tanker drivers will subscribe to it, these days, armed robbers snatch and highjack tankers at will without any security being provided, a lot of accidents happen this days as a result of bad roads and we have lost a lot of our members”

“If any bill of such is passed and it involved the tanker drivers then we will vacate Lagos roads, and whosoever needs petroleum product in Lagos can go to neighboring states where they want us to ply their roads” he said.