ABUJA – Nigeria’s  former Chairman anit-graft boss (the Economic and Financial Crimes Commission) Mallam Nuhu Ribadu has slammed the epileptic nature of power supply in the country in spite of billions of naira spent over the past twelve years.

Speaking in an interview with journalists at the background of a special Visitors’ Forum, a lecture session organized by the Nigerian Electricity Regulatory Commission, NERC, in Abuja, he noted that Nigerians look up to the regulatory agency to create an efficient and competitive system that will make the industry thrive. 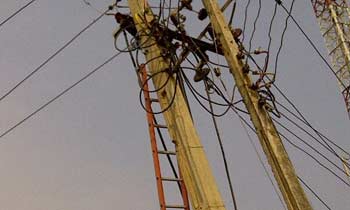 He remarked that it is shame that after so many years, Nigeria could not boast of reliable and effective electricity. “It is a failure and a shame that something as simple as electricity we cannot provide for Nigerians, in spite of billions of dollars earned from oil every year.”

“Poor electricity supply is behind most of the problems we are facing as a country – it has direct relationship with the poor state of the economy, rising cost of living and our inability to produce the things we need as a country,” Ribadu added.

According to him, most developed and developing countries have long solved the problem of electricity generation, even as he stressed that effective and reliable power industry is at the heart of every economic growth index.

He noted that the state of the nation’s power supply over the years has been “embarrassing, almost humiliating, considering that many countries in Africa with even less resources have done better. It is a shame to observe that Egypt, in spite of all their challenges in the past few years, still generates over 70,000MW of power, and South Africa generates more than 40,000MW of electricity, while Nigeria still struggles to produce a mere 4,000MW of power.”

Ribadu asserted that “if NERC gets it right with regards to the reform and regulation in the power sector, Nigeria will it right on electricity. Today, NERC is at the forefront of the march to reform the power sector, and a lot of Nigerians are looking up to them to deliver, and with the caliber of people I see here and the structures they have put in place, I have every confidence that we may finally on the path to true electricity sector reform.”

“I think that given the reform process and that programmes that we have today in the country, NERC is at the centre of it as a regulator. If they manage it very well, if they carry on with the reform programme and processes that are in place, chances are that we will succeed. And succeed we must because electricity is so critical to the economy and well-being of the nation.

Ribadu, who currently chairs the Special Petroleum Revenue Task Force of the Federal government, also stressed that failure of the regulatory agencies in the energy industry to perform their tasks is to blame for the fuel subsidy mess the country is currently embroiled in.

According to him, “The regulatory agencies in the sector are directly responsible, because it is government money. When such money goes out it has to go through somebody, who is a government employee that has responsibility to protect it and make sure that we get value for every dime spent. It must be with his own conspiracy that money goes out for products or services not provided.

“Therefore, one can easily come to the conclusion that it is a failure of the regulators and those with that responsibility, and we would like to see justice done for those who allowed the nation’s money to go out in that manner.”

The former anti-corruption czar pointed out that “if the PPPRA (Petroleum Products Pricing and Regulatory Agency) had done its job, the whole subsidy mess would not have happened. If I were to handle this subsidy thing, I will just go after the PPPRA, especially those who were at the helm when all these mess took place. In one week, I will bring out every single person who took one penny. I will not bother myself with anybody else, I will just get them (PPPRA) because nobody would make a penny out of the subsidy regime without the direct complicity of the PPPRA.”

He asserted that the report from his Task Force does not have anything to do with the fuel subsidy management but with the revenue profile of the energy industry, and ways the country could maximize revenue potentials from its vast hydro-carbon resources.

“The terms of reference of our task force are totally different from what is currently being discussed at the National Assembly and all over the country. But it also has a direct correlation with the responsibilities of the regulatory agencies, particularly the downstream sector. We do intend to come up with our position and I won’t like to comment on the fuel subsidy issue, which is the work of another committee,” he noted.

Ribadu further expressed confidence in anti-graft agency he once headed to get to the root of the fuel subsidy mess, adding that, “I know that the EFCC is working very hard on the matter, and I believe they will not disappoint millions of Nigerians who are expecting a just and reasonable conclusion on the matter. They are working on it, and sometimes this kind of work does take time so that it would be able to stand the test of prosecution.

“They need to assemble evidence so that they can have a successful prosecution, because it is an issue of law enforcement and recovery. My take is that we still believe that we can get justice; it is a matter of time and, ultimately, I have belief that Nigerians will see justice done in the matter.”

He further defended the work of the EFCC, adding that the current crop of leadership at the Commission is competent and professional. “They must be given space and time to do their work effectively. There should not be any outside interference. In the present crop of leadership in the EFCC, we have quality people, some of the best that we can get in our country today, in my personal view.”