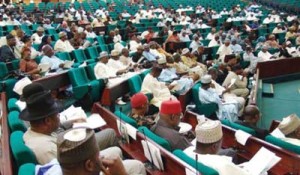 This was disclosed yesterday by Chairman of the committee, Hon. Ifeaanyin Uguanyi when the committee members embarked on a two-days working visit to NIMASA headquaters in Lagos yesterday as part of its oversight functions.

Hon Uguanyin said that the law makers are interested in NIMASA capital projects especially as it concerns the recent Public Private Partnership (PPP) arrangements under the agency.

Even though he refused to field questions from jounalists, Hon. Uguayin disclosed that the committee intends to carry out a torough investigation and dialogue at NIMASA, get back to Abuja and deliberate on its findings before it will make a public statement on them.

Speaking earlier, the Director General of NIMASA, Mr. Patrick Akpobolokemi expressed appreciation to the committee for the passage of the NIMASA 2012 budget, even as he disclosed that the only capital project that was carried out by NIMASA was the one approved by the Federal Executive Council (FEC) on maritime security.