ABUJA-The Group Managing Director of the Nigerian National Petroleum Corporation (NNPC), Engr. Andrew Yakubu has revealed that a significant milestone was yesterday recorded in the oil and gas sector as Nigerian crude oil production has increased from 2.4 Million barrels per day to 2.7 mbpd. 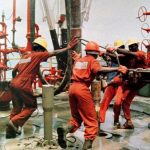 Engr. Yakubu disclosed this on Thursday when the Governor of Benue State, Dr. Gabriel Suswam led a high powered delegation on a working visit to theNNPCTowers,Abuja.

The GMD stated that the security measures put in place by the Federal Government in the Niger Delta region was beginning to yield positive results as shown in the increased crude oil production in the country.

“We want to thank the President, Dr. Goodluck Jonathan, for his great initiative to restore security with regards to pipelines and our crude oil production facilities and we thank the Minister of Petroleum Resources, Mrs Diezani Alison-Madueke for driving the process. I am glad to report to you that in crude oil production, yesterday, we recorded an all time high of 2.7 million barrels. This has not been recorded before,” Engr. Yakubu affirmed.

He appealed to all the State Governments, Local governments, communities and other stakeholders to work in partnership with the Corporation to safeguard the pipelines and other strategic national assets in order to reduce wastages.

The NNPC helmsman expressed the readiness of the Corporation to collaborate with the Benue State Government to restore the Makurdi depot adding that a similar collaboration with the Abia State Government recently led to the re-commissioning of theAbadepot after being closed for seven years.

He assured that as soon as pipelines supplying petroleum products fromAbatoEnuguandEnuguto Makurdi depots are certified all right, the Corporation would commence immediate supply to the area.

“We have not had any negative report from theEnuguto makurdi pipelines and as soon as we do our integrity check and its okay, we will commence supply to the makurdi depot,” the GMD informed.

On the efforts by the Corporation on gas infrastructure, the GMD noted that various gas pipeline projects are presently ongoing across the country to support the industrialisation efforts of the Federal government.

Engr. Yakubu enjoined Governor Gabriel Suswam to assist in convincing his colleague Governors to buy into the Petroleum Industry Bill recently submitted to the National Assembly for consideration and passage into law noting that the bill makes provision for the growth of private initiatives in the petroleum Industry.

Speaking earlier, the Governor of Benue State, Dr. Gabriel Suswam commended the NNPC for the Kerosene Direct initiative and said the scheme has helped tremendously in the distribution of the product to the people of the state.

He stated that the State Government was willing to partner with the Corporation in the resuscitation and expansion of the Makurdi depot, development of gas infrastructure and the ethanol project of the Corporation.

High pointof the visit was a presentation by the Benue State Government on the Makurdi tank farm.