Nigerian Govt says new Petroleum Law is fair to all, and will increase production

LONDON-The Minister of Petroleum Resources and Chairperson of the Board of Directors of the Nigerian National Petroleum Corporation, NNPC, Mrs. Diezani Alison-Madueke  has described the draft Petroleum Industry Bill recently sent to the National Assembly by President Goodluck Jonathan as a viable document capable of providing a win-win scenario for all stakeholders in the oil and gas industry in Nigeria.
Speaking at a High Level Investment Summit in London organised by the Ministry of Trade and Investment in conjunction with the Bank of Industry, Mrs. Alison-Madueke in a presentation titled: Investment Opportunities in Nigeria’s Downstream Oil and Gas Value Chain, called on investors around the globe to take full advantage of the enormous opportunities the proposed oil industry reform law has to offer.
The Minister noted that apart from providing a healthy deregulated environment for private sector participation in the downstream sector, the PIB offers a refreshing fiscal regime with strong incentives for production.
“We have a fiscal regime by royalty and tax which is now predicated on production as opposed to terrain and investment as was previously done. Royalty by production as we have outlined in the bill will capture the output of company as opposed to its location; it will create a fair balance between small and big operators operating in the same terrain, it will give operators the opportunity to make fair returns during field decline, and it proposes lower rates on condensate from large fields as well as ultra deep water fields,’’ Mrs. Alison-Madueke said.
The Minister explained that the royalty by price ensures a trigger mechanism which provides the existence of fair and balanced pricing which is fair to all irrespective of the terrain of the operator since it comes with a self adjusting 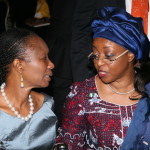 The Minister of Petroleum Resources, Mrs. Diezani Alison-Madueke and the Managing Director of Bank of Industry, Ms Evelyn Oputu at the High Level Investment Summit in London

rate based on the price of crude oil and the natural gas price.

She noted that the new bill provides for a robust and efficient tax regime based on CITA (Corporate Income Tax), the Natural Hydrocarbon Tax and Production Bonus based regimes.
On the reported concerns raised by some operators over the proposed increase in government take from 61 to 72 percent in the deep and ultra deep offshore, the Minister stated that in arriving at the figure, Government considered all the variables taking into account the interest of the nation as well as what is obtainable in other jurisdictions across the world.
“The proposed increase of Government to 72 percent is competitive when we look at the scale of other entities around the world like Norway, Indonesia and even Angola. You recall that the 1993 Production Sharing Contract term (PSC) was based on $20 per barrel crude oil prices real time but since the start of production in the PSC fields crude prices have been upwards. So it was very necessary to look at the terms again,” Mrs. Alison-Madueke submitted.
She noted that the new regime offers an avenue for fresh investments due to its incentive for production which is designed to attract extra investment in that regard.
“In all, the proposed Petroleum Industry Bill 2012 comes closest to what we consider a win-win situation for the Nigerian Government, the Nigerian economy and people as well as other stakeholders and potential investors in the oil and gas industry,’’ she stated.
The event which was attended by a large number of would be investors also drew a large number of Nigerians in Diaspora.They include key Nigerian business men, the Minister of Finance and Coordinating Minister of the Economy, Dr. Ngozi Okonjo-Iweala, Minister of Trade and Investment, Olusegun Aganga, Governor of Ekiti State, Kayode Fayemi.