ABUJA – Nigeria’s President Goodluck Jonathan has reaffirmed Nigeria’s commitment to the full implementation of the principles of the Extractive Industries Transparency Initiative (EITI) in the Nigerian oil, gas and mining sector.

The President, who gave the assurance while inaugurating the new Board of the Nigeria Extractive Industries Transparency Initiative, NEITI, in Abuja, Nigeria’s capital noted that the Extractive Industries watch-dog agency has performed commendably over the past decade and had contributed to the robust reforms within the industry.
According to Jonathan, who was represented by the Secretary to the Government of the Federation, SGF, Senator Anyim Pius Anyim, the government was committed to the full implementation of global best practices in the extractive industry as exemplified by the EITI principles, towards ensuring that citizens reap the benefit of the natural resources.
“I wish to state the unequivocal commitment of the Federal Government to full implementation of transparency and accountability as enshrined in the NEITI Act and the principles and criteria of the  global  Extractive Industries Transparency Initiative,” he noted.
The President explained that the work of NEITI through its independent reports set the pace for government’s decision to carry out massive reforms in the extractive industry.
He explained that the appointment of the new Board members “is therefore coming at a time that the work of NEITI in the extractive sector has set the pace for  the Federal Government to embark on massive reforms of the sector especially the oil and gas industry to ensure that revenues from the industry support the transformation agenda of this administration.”
“The Petroleum Industry Bill now before the National Assembly for consideration and passage into law is a testimony of government determination to reform the sector to conform to NEITI principles and objectives of transparency and accountability in all business transactions in the extractive industry,” he further stressed.
The President’s identified priorities to the new Board includes making NEITI Audit reports regular, current and user friendly, implementation of NEITI’s five year development plan, human capacity development, effective communications, expanding NEITI activities to states and local governments, coordinated legal framework and building better inter agency alliances as well as priority to NEITI compliant programmes.
He advised the Board to maintain highest ethical standard expected of a Board supervising anti-corruption agency like NEITI.
Responding, the Chairman of NEITI National Stakeholder Working Group (NSWG) Mr. Ledum Mitee promised to take NEITI principles of good governance, transparency and accountability to all nooks and crannies of the extractive industries.
Mr. Mitee pledged that while focusing on the oil and gas sector, NEITI under his leadership will expose, explore and expand the potentials in the Nigeria’s solid minerals through a coordinated programme built on EITI principles.
The composition of the new National Stakeholders Working Group (NSWG) include, Mr. Ledum Mitee-Chairman, Hajia Mariam Ladi Ibrahim -Member, Dr. Kate Okparaeke -Member, Mr. Isaac Boyi – Member, Barr. Patrick Udonfang – Member, Mrs. Abiola Enitan Edenaike – Member, Abubakar Balarabe Mahmud, SAN – Member and Engr. Musa Nashumi – Member.
Others are Chairman, OPTS, (Rep. of Extractive Industry Companies) – Member, National Coordinator, Publish What You Pay, in Nigeria (Rep. of Civil Society) – Member, and President of  PENGASSAN (Rep. of Labour Union)-member. 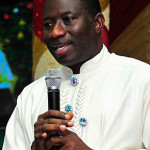 Also on the Board is Mr. Dominic Nwachukwu – Member, Mr. Bassey Ekefere – Member, Group Managing Director (NNPC) – Member, and the Executive Secretary of NEITI Mrs Zainab Ahmed – member and Secretary to the Board.