...To Liaise with Finance Ministry for Aid to Local Oil Companies 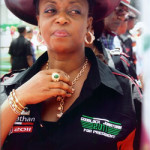 Minister of Petroleum Resources, Mrs Diezani Alison-Madueke, has pledged government’s support for indigenous oil companies that are willing to invest in every area of the value chain of the oil and gas sector.

Alison-Madueke disclosed this at Aguleri-Otu during the inauguration of Orient Petroleum Plc’s Anambra River Production Facility in Anambra State, the first oil production from an inland basin in Nigeria.
The Minister said President Goodluck Jonathan has directed the Ministry of Petroleum and the Ministry of Finance to set up an inter-ministerial committee to fashion out modalities for raising financial support for indigenous oil companies like Orient who are ready to invest not only in production but also in refining to add value to the crude oil and gas locally before exporting in order to generate employment for the the youth and more money for the country.
She expressed satisfaction with the project, explaining that the significance of the event was not just in the discovery and production of oil from an inland basin but in the fact that the feat was achieved by an indigenous company.
“This shows the way we want to go in the industry; we want to encourage more indigenous oil companies to emulate Orient Petroleum Resources in investing not just in production but also in refining. We are working with the Ministry of Finance to set up an inter-ministerial committee to work out ways to give financial support to indigenous companies to bring in modular refineries,” she enthused.
The Managing Director of Orient Petroleum Resources Plc, Engr. Nnaemeka Nwawka, who spoke earlier had explained the challenges the company faced in raising funds for the projects, adding that banks have not been too keen in funding the refinery project which is very capital intensive.
He said it was the financial challenge that drove the company into developing its OPLs 915 and 916 first to guarantee crude supply to the refinery which he said will be completed by 2013.