lAGOS-Dana airline has said that the airline is yet to receive official letter to the lifting of its suspension by the Federal Government. 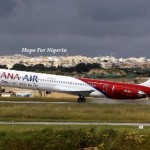