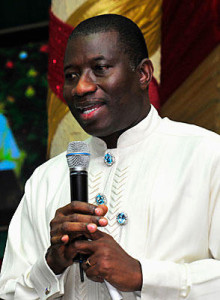 IN its quest to ensure that the success recorded thus far in the nation’s power sector which has been hailed by Nigerians continues to record further progress, the Federal Government of Nigeria has invested about $8 billion (N1.2 trillion) into new power projects across the country.
The Managing Director of Niger Delta Power Holding Company Limited, (NDPHC) Mr. James Olotu made the disclosure during the official commissioning of the 150MVA transmission station in Ikeja West, located around Ayobo area of Lagos, at the weekend.
This investment, according to him, is expected to create 10 new power projects, which are projected to deliver additional 4,770 Mega Watts (MW) to national grid.
Olotu, who stated further that four out of the 10 power plants are now operational, while the remaining six are expected to be commissioned before the end of 2012, also enthused that the facilities have continued to impact positively on power supply across country.
His words: “This amount is contributed to bring into existence 10 more power stations that will give Nigerians not less than 4,770 MW of power, when completed. We are also building hundreds of thousands of kilometre of transmission lines across the nook and crannies of this country including substations to support the transmission lines. We are also building several thousand kilometres for distribution in addition to infrastructure and substations to support it. These projects also include the gas pipelines within the same fund to ensure that gas flows into the generating plants.
“Out of the 10 power plants, four are now on stream such as Olorunshogo in Ogun State, Omotosho in Ondo State, Sapele in Delta State and just yesterday Alaoji in Abia State has added new units of power into the grid.
“As we speak now, total capacity from this new unit is about 1,150 MW. As part of the unit delivery, we expect that every month those power stations would be delivering the balance their units into the grid. So that by December, we will be looking at about 1,500MW. Other six power generations stations are at about 80 per cent completed, and we will get to commission them soon. So by the end of the year we are expecting additional 2,500MW from all these stations I have mentioned.” He said.
Olotu said: ‘We made a commitment and we are making sure that we deliver on our promises. We promised to commission new projects monthly in Lagos. Yesterday, we were at new Idumagbo where we commissioned a 15 MVA additional capacity to the transformers there. Today we are witnessing the same here at Ikeja West, increasing the capacity from 600MVA to 750MVA and that is a significant improvement in the transmission capacity of this nation to deliver power to Lagosians.
He added that the intervention would not only take place in Lagos, but cut across other states of the country.
“By early next month, we are going to Ibadan and Benin and commission other projects like this and that will continue till December,” he said.
On the contractors that failed to deliver projects, Olotu said the Federal Government’s hammer is waiting to fall on them.
The General Manager, Lagos Operations of the Transmission Company of Nigeria (TCN), Oyeleke Adeoye, said the transmission station has already begun to impact positively on power supply in Lagos State and its environs.
He explained that the existing 4×150 MVA transformers (about 600MUA) have been overloaded for so many years, hence, the new project which is adding another 150 MVA, would boost the capacity. Already the facility is taking about 65 MW of power generation from the grid.
Adeoye said the transmission company is adding a similar 150 MVA at Akangba in Surulere.