LAGOS-Barely a month after it arrested and paraded ten persons suspected to be sea pirates in connection with an attack on one of the Agency’s boat, the Nigerian Maritime Administration and Safety Agency (NIMASA) has arrested another eleven persons who were suspected to be oil thieves.

The suspects whom the Agency reported were part of the big sponsors of Pirates activities on Nigerian waters were raided from different locations in Lagos and outside Lagos. One of the kingpins sponsoring the Act, Capt. Nicholas Okotie was arrested along with the team in Lagos even as one of his vessels, MT Ejenavi has been impounded by NIMASA.

Parading the suspects to journalists in Lagos yesterday, Director General of NIMASA, Mr. Patrick Akpobolokemi explained that the Agency clamped down on the team as they were getting set to embark on another operation.

Akpobolokemi said that the group and their company, Great Eagle Maritime Limited, has been under great surveillance by NIMASA for a long time and that the Agency decided to move in on the oil thieves at the early hours of Tuesday.

Akpobolokemi said that the groups were arrested in connection with the siphoning of petroleum products, pipeline vandalization and kidnapping which one of them is currently standing trial for.

“They are part of the network, the cartel that has caused a lot of problems for us for a long time, they have been engaging in organized crime for a long time within our maritime domain, high jacking of vessels, kidnapping and so on”

“They have been on our surveillance list, we have been monitoring them and we picked them from different locations, some outside the state. One of the sponsors that masterminded these activities is also here with them” he said.

Explaining the mode of operation adopted by the thieves, the NIMASA boss said that If a tanker vessel has 10,000 tonnes of petroleum products, they go there and siphon 3,000 tonnes and they go ahead to they sell it.

“They go back again to kidnap and break oil pipes, there is nothing that they have not been doing but today the law has caught up with them. They have been bringing down the reputation of this country in the committee of nations” he lameted.

Akpobolokemi however explained that the arrest was made possible as result of the partnership between NIMASA, the Nigerian Navy and the Global West Vessel Specialist Limited.

He also appealed to the Nigerian Judiciary to ensure that the arrested pirates get proper prosecution. He expressed discomfort by the way past cases have been treated.

“If we do our job and they do their job the country will make progress, we have made so many arrests and some of them will come out on the streets”

“Our law enforcement A 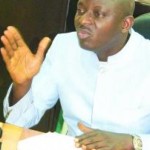 gencies are not spared in this matter, if you want to solve the problem of high-jacking, piracy, illegal bunkering and oil theft, something must be done and the right steps must be taken” he said.