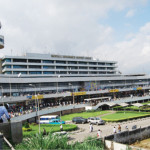 -FACTS have emerged that Nigerian freight forwarders practicing at the Murtala Mohammed Airport (MMA) in Lagos are currently facing hard times as a result of the planned renovation of Nigerian Airports by the the Federal Airport Authority of Nigeria (FAAN) which has affected the offices and secretariats of the freight forwarders.

It was learnt that FAAN is coming up with an arrangement that is directed by the Minister of Aviation, Mrs. Stella Odua Nigeria airports should be given a face-lift.

Biztellers has also confirmed that the secretariat of the two major freight forwarding association in Nigeria namely; the Association of Nigeria Licensed Custom Agents (ANLCA) and National Association of Government Approved Freight Forwarders (NAGAFF) has been affected in the on-going renovation.

Before now, the popular ‘Hadj Camp’ had played host to freight forwarders and various office complexes for operators arround the airport.

But speaking with our correspondent in Lagos earlier today, Secretary of the Airport chapter of ANLCA, Mr. Davies-Ben Chukwuneye, lamented that the Secretariat of the Association has been demolished and the freight forwarders have been sent packing from the vicinity.

He comfirmed that as a meantime solution, FAAN has asked the freight forwarders to pitch their tent with the bus drivers at the garage around Hadj Camp bus park pending when the renovation of the Airports would be completed.

According to Davies-Ben, the present situation at the airport is precarious and traumatizing because licensed Agents at the Airport carry huge amount of money daily and that the new location is not good enough.

“Unfortunately, where they relocated us is outside the hadj Terminal and we are not happy with the place, considering the fact that our business has to do with carrying huge sums of money and the security is not there”

He pointed out that the Association has gone back to FAAN and demanded that they do something about the place but that FAAN is still “insisting that we must go to that place just by hadj camp bus park, so we are going to share the place with motor park Associations” he lamented.

Continuing, Davies-Ben explained that “we as an association are demanding for a documentation that will at least give us the right to go there, so that tommorow nobody will just come and chase us out, with the paper we can go into litigation when neccessary.

“We have agreed to go to wherever they asked us to go but there must be a documented evidence of our movement” he demanded.

Confirming the development to our correspondent, Public Affairs Manager of FAAN, Mr. Akin Olukunle explained that the Secretariat of the Associations within the NAHCO complex is not befitting for them and that management is erecting structures from which all the operators will benefit in the long run.

Olukunle appealed to the operators to make do with the place they have been provided, pending the completion of the project.

“You will see that where they were using was not an ideal place for their kind of business, and for security reasons we want to give them a befiting place, in the meantime they just have to manage” he said.

Olukunle explained that FAAN management is currently carrying out the remodelling of eleven airports in Nigeria and that the MMA is part of it.

He told our correspondent that the contractor in charge of the construction had few weeks ago pulled down unwanted structures within the NAHCO complex and that any moment from now it will mobilise man and materials to the site.