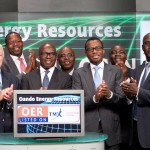 Following the development, Oando Group has become the only company in Nigeria with three trans-border listings – the Nigerian Stock Exchange, NSE, the Johannesburg Stock Exchange, JSE, and the TSX.

Tinubu and Boyo received the commemoration plaque and certificate of listing from the Senior Vice President of the TSX, Mr. Ungad Chadda.

Oando Energy Resources has subsequently obtained approval from the Toronto Stock Exchange to list its common shares and warrants on the TSX under the symbol OER.