LAGOS-Several passengers were seen at the Arik Air stand at the General Aviation Terminal (GAT) today on queues to collect their refunds for not being able to fly with the airline yesterday.

Our correspondent  was at the terminal today and report that Arik Air counters for the sales of tickets remains closed as the unions have vowed that until the airline pay up some money out of the huge debts that it has incurred it would not fly. 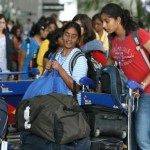 Our correspondent also reports that a big van was parked at the front of the terminal with loud sound of music playing at the terminal while some members of the unions were moving around to ensure that Arik airline did not embark on any flight operation for the day as the grounding of the airline enters day two.

It was also gathered that the boarding gate and announcement room were all under lock and key so that the airline would not have access to use the facilities.

One of the passengers who identify himself as James said that since he could not travel with the airline yesterday that he had to come to the terminal to collect his refunds.

He said”since the disruption of our flight by the unions yesterday which made me unable to travel, I decided to come here and collect my refunds so that I can plan my traveling for another day”