LAGOS-IN a switch dimension, the aviation unions under the umbrella of their various bodies called off their protest and decided to allow Arik Air resume its flight operations in the country after series of meetings with the various heads of agencies in Nigeria’s Aviation Industry on Friday.

Disclosing this development to newsmen, the Director General of the Nigerian Civil Aviation Authority, (NCAA), Dr. Harold Demuren accompanied by other heads of  Agencies said that the action taken by the unions was not the way that the management and the airline had planned to settle all the debts.

According to Demuren, since the time the last minister of aviation came, Arik Air was given a time line of 30 months about three years whereby all its debts were spread so as to enable the airline to pay its debts little by little.

He however noted that the industrial action embarked upon by the unions against Arik airline has been called off with immediate effect. 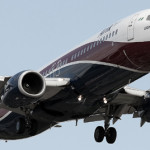 “following the industrial action embarked upon by the unions in the aviation industry yesterday which led to the grounding of Arik Air operations, we are pleased to inform the Nigerian traveling and general public that the management of NCAA, FAAN and NAMA met with the leaders of the unions this morning and afternoon”

“As a result of this intervention, the unions called off the action and Arik Air is free to commence flight operations as normal” he added.