LAGOS-The face-off between Nigeria’s largest Airline, Arik Air and the Federal Airports Authority of Nigeria (FAAN), an Agency of the Nigerian government  over the airline’s indebtedness reached a climax as the airline management blacklisted the Managing Director of FAAN, Mr George Uriesi alongside 26 others including S 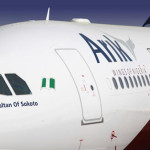 Workers union in the industry had last week disrupted operations of Arik Air at the General Aviation Terminal GAT over the indebtedness of the airline to agencies of government totalling N18 billion. Out of the amount, FAAN was owed N7.077billion.

Following the unions protest, Arik announced the shutdown of its domestic operations but a meeting of all parties concerned were held at the instance of the Minister of Aviation, Princess Stella Adaeze-Oduah where peace was brokered in Abuja on Saturday.

Last Friday, as a result of the truce, the Chief Executives of all the three major Agencies, led by the Director General of the Nigerian Civil Aviation Authority (NCAA), Dr Harold Demuren addressed a press
conference announcing the truce having discussed with leaders of the union on the need to let peace reign in the industry while efforts were being made to recover debts owed by Arik.

Among the persons in the list include both nationals of Nigeria and foreigners believed to have committed various offences considered inimical to flight safety, among the personal-non grata  had Uriesi topping the list.

The airline only adduced ‘Management Decision’ for the blacklist while it also gave September 24, 2012 as the effective date of Mr. Uriesi’s blacklist.

When the news of the blacklist of the FAAN MD filtered out on Monday, the spokesman of Arik, Mr Ola Adebanji vehemently denied when contacted on phone by this reporter, saying “nothing of such took
place”

But the list obtained by our reporter yesterday confirmed that indeed Arik Air management blacklisted the FAAN boss.

Others in the list include Mr. Omojuwa J. Japhet whom the airline claimed to have lost his ipad ”on our flight in June,12.Since then, he has resorted to posting damaging things about Arik Air on Twitter
and some other social media sites. All efforts to pacify him proved abortive.”