ABUJA-The Senate Committee on Gas Resources on Monday gave high marks to the Management of the Nigerian National Petroleum Corporation, NNPC, for its effort at implementing key gas infrastructure projects across the country which has witnessed a significant leap in power supply due to the availability of adequate gas supply to power plants. 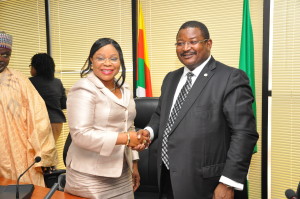 In a chat with Journalists at the end of the oversight visit to the NNPC Towers, Committee chairman and leader of the delegation, Senator Nkechi Nwaogu expressed satisfaction with the contributions of the Corporation in ensuring adequate gas supply to power plants as well as to industries.
“On the whole and in general, I think the 2012 budget of the NNPC has been reasonably complied and implemented.  We saw the documentation. What I saw today and what we saw as a Committee, we are encouraged, we are impressed and we are delighted. What we need to do is to consistently follow- up to ensure that they do not start on a good note and derail partway, that is the function of the National Assembly oversight activities”, Senator Nwaogu enthused.
In his presentation, the Group Managing Director of the NNPC, Engr. Andrew Yakubu stated that within the appropriation period of 2011/12, gas infrastructure focus has been prioritized around critical pipeline expansions and additions to serve stranded power plants especially along the Escravos Lagos Pipelines (ELPS).
“Very significant progress was made with these projects leading to gas deliver-ability improvement to Geregu, Olorunshogo, Omotosho and Sapele power plants. In total, an addition of about 250mmscf/d of gas has been enabled towards improved power generation over the period as a result of infrastructure development,’’ the GMD said.
Engr. Yakubu noted that despite the paucity of funds, the Corporation was able to implement 9 key gas infrastructure projects through 2011/12.
In 2012, a budget request proposal of $1.05billion was made to facilitate the construction of some gas infrastructure, however an appropriation of $490m was finally made by the National Assembly which is less than 50 per cent of the requested funding.
“Due to funding shortfall, an additional 8 projects remain unfunded. These will be the focus for 2013 budget,’’ the GMD stated.
He said that as part of a creative strategy to accelerate these projects, a Public Private Partnership is being developed to augment the envisaged funding from the Federal Government.