LAGOS-But for the grace of God, there would have been a major accident at the Murtala Muhammed Airport Lagos today as IRS 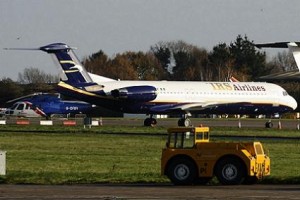 Forkker 100 aircraft with Reg. No. 5N SAT while taxing hit a truck belonging to the Federal Airport Authority of Nigeria (FAAN) with the tip of its wing.

Confirming the incident in a statement, Managing Director of IRS airlines, Mr. Yemi Dada said that the incident happened when the airline’s morning flight LVB 3306 taxied out to take off from Lagos to Kano at about 7:48am in the morning.

He pointed out that while taxing on the taxi way, the captain noticed a FAAN truck in a ditch affirming that there was no FAAN marshallers around neither was there a marking to indicate that it encroached into the taxi way.

According to Mr. Dada it was due to the absence of marshallers and the marking that misled the captain only for the wing tip of the aircraft to hit a protrusions from the truck towards the rear of the truck.

He however said that the incident resulted to a minor damage of the aircraft which also raised panic amongst the passengers stressing that the  incident has since been reported to the Nigerian Civil Aviation Authority (NCAA) so that repair work could be done on the aircraft so that it can return to service.

On its part, the General Manager, Corporate Communications of FAAN, Mr.  Yakubu Datti said that the incident would have been averted should the IRS pilot, Captain D Kelly listened to the advise of an Arik Air pilot who informed him about the truck which was stocked in the ditch on the taxi way thus causing obstruction.

According to Mr. Datti, he said that the pilot of IRS airline felt that he could maneuver the obstacle by his own judgment but this failed because the tip of the wing of the aircraft collided with a section of the gully emptier at about 7.45 a.m this morning.

“Capt. D Kelly did not stop but continued to taxi back to the boarding gate of MMA2 to discharge his passengers. No passenger or crew sustained injuries as a result of the incident. All the passengers were later transferred to another IRS flight to Abuja”.

“Officials of the Accident Investigation Bureau and the Nigerian Civil Aviation Authority were immediately invited to the scene of the incident for the on-the-spot assessment of the incident while engineers of the Federal Airports Authority of Nigeria were placed on stand-by to evacuate the stuck sewage tanker as soon as preliminary investigations by both AIB and NCAA were concluded”he stressed.