The managing director of the Nigerian Airspace Management Agency NAMA Engr Nnamdi Udoh has called for a team work between the unions and the management of NAMA to move the industry forward. 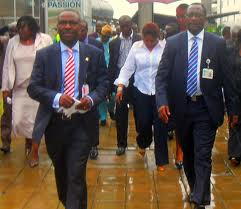 Speaking at the  summit meeting of the National Union of Air Transport Employees NUATE,  NAMA branch chairmen /secretaries held in Lagos said, NAMA has continue to forge ahead inspite of all criticisms based on solid foundation and focused management.

Engr. Udoh explained that the era of unions banging tables to settle issues was over adding that issues were settle at the table strategically and urged them to embrace technology.

He called on the unions to wade into the wages commission in order to give workers sense of direction adding that the only way forward was to find alternative source of funding of NAMA.

The NAMA boss explained that workers will get their salaries as at when due as it was the right of the workers to get their dues.

Engr Udon reiterated that automation will never lead to job losses in his agency adding that he will not be party to signing any dismissal letter of any of his workers.

He said N34 million was set aside every month to meet workers pressing needs as a result of the management response to workers plight and warned against frivolous requests from workers.

Meanwhile, the President of the National Union of Air Transport Employees NUATE Comrade Safiyanu Mohammed said the union was not having any misunderstanding with the management of NAMA adding that there was break in communication between the duos.

Comrade Mohammed cautioned branch executives against discussing national issues with management as it was the responsibility of the national body.

In his address, the Coordinating chairman of NUATE NAMA, Comrade Ade Adekoya noted that the challenges facing the aviation industry was utmost in priority and urged the unions to see the need to work together to move the industry forward.

While commending the release of NAMA workers promotion for 2011 and 2012 which has led to the payment of backlog of staff claims, Adekoya lamented that the correct version of the condition of service and salary structure could not be assessed which has led to anxiety and coded furry among workers of the agency.

Adekoya commended the NAMA management for regularizing casual workers as permanent staff in the organization expressing the hope that the workers regularization will add new impetus to the efficient and effective service delivery in the agency.

He appealed to the management of NAMA to correct the embarrassing contradictions and perplexing ambiguities in the salary chart approved by the national income salaries and wages and ensure its implementation by November 2012.

Adekoya stressed the need for the update and development of skill of workers regularly by exposing them to the best practices to be prepared for not only to cope with the demands of today’s environment but also face unprecedented future.

Other challenges enumerated by the chairman include, life insurance, pension matters, airmen allowances, airlines indebtedness among others.