Med-View gets AOC to commence scheduled operations next month

By Oyise OGHENE
It was pomp and pageantry on Friday night at the headquarters of the Nigerian Civil Aviation Authority (NCAA) as Med-View Airline, which is noted for annual hajj exercise to Mecca, Saudi Arabia was eventually issued the Air Operator’s Certificate (AOC) to commence scheduled flight operations after two years of rigorous attempt to get the certificate. 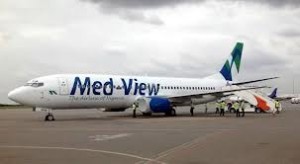 The airline was issued a certificate to operate scheduled, cargo, charter and passengers operations in the Nigerian aviation industry in a certificate personally signed by the Director-General, NCAA, Dr. Harold Demuren.

Speaking in his office during the presentation of the certificate to the management of the airline, Demuren challenged the management to contribute their quota to the development of the sector and warned that the agency would not tolerate any unprofessional conduct from any airline in the sector.

He explained that unlike in the past when the AOC could be gotten easily by intending carrier in the industry, NCAA would ensure that anybody that is issued the certificate must be those that duly deserved it and emphasised that the agency would not relax its rule in order to achieve total safety for passengers and aircraft in the sector.

Meanwhile, the Managing Director of the airline, Alh. Muneer Bankole commended the agency for its careful oversight function and described the mandatory demonstration flight of 50hrs by NCAA as a step in the right direction.

He explained that the essence of the 50hrs demonstration flight was to ensure that the applicant could carry out scheduled operations with all the safety standards, adding that the carrier was the fifth airline to be certificated by NCAA under the new re-certification programme of NCAA.

Bankole informed that the airline would commence its inaugural flight first week of next month after its in-house orientation scheduled for this week.

As part of its Unique Selling Proportion (USP), Bankole said on-time departure and arrival would be its watchword as he observed that most of the carriers currently flying in the industry were not time conscious, adding that its safety and in-flight services would be distinct from others.

He said, “What we achieved today was not a child’s play. First and foremost, I want to commend the NCAA and the Director-General who probably in his own wisdom decided to enforce the compliance. It is a good thing for this nation and the industry. On the record today, we are the fifth airline that will get this certification by NCAA. I’m talking here about re certification since this AOC has commenced.

“Demonstration flight, we will not condemn it, it is the best because you don’t carry commercial passengers when you are not sure that your aircraft is safe for flying. They insisted that we must fly 50hrs and we flew 50hrs35minutes and it on record that we gave them 7hrs39minutes extra. If anybody is talking about flying compliance, I should be able to say that I’m complaint. I’m very proud of this, there were no cutting corners, we went for it and we earned it. The airline has opened; the door has opened by God.”

The airline hopes to fly to at least four routes in the country namely; Lagos-Abuja, Abuja-Port Harcourt, Maiduguri -Yola and Lagos-Port Harcourt with the two aircraft while its intend to expand its operations with the arrival of additional aircraft scheduled to arrive before the end of the year.