Customs Zone ‘A’ Cordinator Embarks On Tour Of Commands

LAGOS: Apparently determined to achieve its revenue target of N1trillion which it had set for itself for year 2012, the Zone ‘A’ Cordinator of Nigeria Custom Service, Assistant Controller General, Victor Gbemudu has embarked on a tour of all the commands in the zone in order to further motivate the officers and give them goodwill message of the Comptroller General, Alhaji Nde Dikko.

The cordinator had began the tour of the commands on Monday with his visit to the Federal Operations Unit (FOU) in Ikeja Lagos and today he visited the PTML command and the Tin Can Island command in Apapa, Lagos. 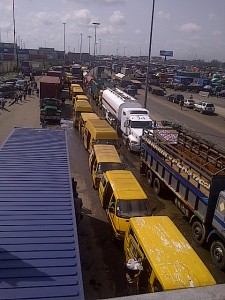 Biztellers learnt that the motivation tour is to psyche up the officers of the command to step up their revenue generation.

Meanwhile, some custom brokers arround the ports yesterday in a chat expressed doubts, saying that the target of the custom this year might not be achievable.

Speaking shortly after the visit of the cordinator to the PTML command yesterday, the image maker of the command, Mr. Steve Okonma confirmed that the visit of ACG Gbemudu is to bring the goodwill message of the Comptroller General of Customs, Alhaji Nde Dikko to officers of the command.

Speaking, Okonma explained that “He brought a message of goodwill from our Comptroller General to the officers that we should work harder in order to meet the goal of the service”

He however confirmed that this was not the first time that the zonal cordinator will be visiting the command, according to him “he has been here before, when he took over he went on a familiarization tour, he is the zonal cordinator of zone A, so he is going round the zone under him” Okonma said.

It was gathered that the zonal cordinator will also be moving the tour to Seme command and Idiroko commands on Wednesday November 7th 2012.