By Oyise OGHENE
YEMEN: Emirates airlines have in recent times introduced additional flight to Sana’a Yemen with a daily service from Dubai in commemorating of  its 16th anniversary of operating into the country.

The airline launched services to the Yemen capital on 28th October 1996, beginning with two weekly flights. The route is currently supported with an Airbus A330-200 aircraft in a three-class configuration. 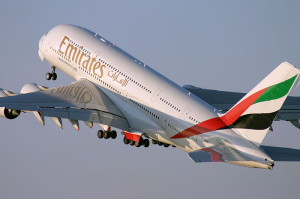 Disclosing this development to newsmen, Emirates’ Country Manager in Yemen Husain Bani Hashem said that it was a great achievement for the airline in creating an additional route in Yemen couple with the fact that the airline was also celebrating its 16th years anniversary of flying to Yemen.

“It is with great pride that we are strengthening our commitment to Yemen at the same time as we celebrate our 16th anniversary” Hashem said.

“Now, with the daily service, Yemen can look forward to trade and tourism being further stimulated between destinations across our vast network via Dubai,” Hashem added.

He further noted that the additional frequency would also provide more flexibility for passengers from Yemen to Dubai and onwards to popular destinations such as China, Hong Kong, India, Malaysia, France, the United Kingdom and the United States.

Mr. Hashem also said that the 7th weekly flight will enables Emirates SkyCargo to offer additional capacity in the belly-hold of aircraft for Yemen’s exports, such as seafood.

“With a fleet of 188 aircraft, Emirates currently flies to
127 destinations in 74 countries. In the coming months, the airline will launch further destinations; Lyon on 5th December, Phuket from 10th December, Warsaw as of 6th February 2013 and Algiers effective 1st March” he stressed.