By Oyise OGHENE
Aero Contractors, the leading e-airline in West Africa has announced an increase in her fleet with an additional 2 Boeing 737-400.

This addition, which takes Aero’s Boeing aircraft size to 12 is part of the airline’s expansion programme to double the fleet and add new destinations.

The new B737-400, 144-seater aircraft were equipped with the latest navigation equipment with lower fuel burn and increased reliability making the aircraft more efficient, environmentally friendly and easier to maintain. 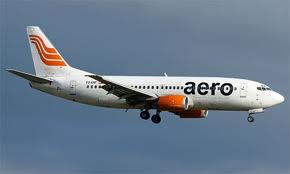 The addition of these aircraft to Aero’s growing fleet according to the Managing Director of Aero, Capt. Akin George will further consolidate Aero’s leading position both in the domestic and regional market, making Aero one of the fastest growing airline in West Africa by aircraft usage“

The arrival of these new Boeing 737 aircraft, will allow us to introduce new routes and put us in a better position to transport more passengers in this festive season, says Capt George

“Aero adheres strictly to the maintenance schedule for aircraft as prescribed by the manufacturers and the Nigerian Civil Aviation Authority {NCAA}. We will not relent in our efforts to offer the most satisfying flying experience for passengers every time they fly with us.”
Aero has grown progressively with the introduction of new routes and aircraft to its fleet over the past few years thereby building its customers’ confidence in the airline’s ability to meet and exceed their travel needs and requirements.