THERE are high indications that the ongoing scarcity of petrol in Nigeria may be further worsened as  embattled Capital Oil and Gas Limited says it has shutdown operations in compliance with a court order to that effect, even as it warned that shutting down its operations could exacerbate the scarcity of petrol and kerosene in the country.

Ubah’s Capital Oil is reported to be responsible for about 35 percent of Nigeria’s daily petroleum products distribution, just as his kero-direct scheme with the NNPC  had made the company to employ additional 557 youths, while it has penciled down another 158 employments before the completion of the distribution. “Under the arrangement, the Pipelines and Products Marketing Company (PPMC), a subsidiary of the NNPC, provides the product that will be sold to end users at the official rate of N50 per litre, while the product is being dispensed through the use of Capital Oil dispensing trucks. The Kero-Direct Scheme has been hailed by various quarters as a panacea to availability of the much needed product

Besides the plot to take over the company, some observers claim recent actions against it were aimed at scuttling Ubah’s plan to contest the governorship election in Anambra State in 2014.

The company is also allegedly exposed to some Nigerian banks, a development that led to a recent court order obtained by the Assets Management Company of Nigeria , AMCON, freezing the company’s operations.

Besides, Access Bank, a local Nigerian bank has also obtained an injunction from a London court, freezing the company’s assets worldwide. 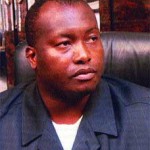