LAGOS: Eagle eyed officers of the PTML command of the Nigeria Custom Service has impounded a vehicle with concealed live catridges as well as other expended amunitions.
The vehicle, a Toyota Takuma Pickup, was said to have originated from the US, to the Port and Terminal Multiservices Limited (PTML) from where it was transfered  to the Mile 2 offdock terminal of the PTML where it was examined by the Nigerian customs. 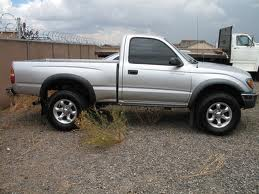 While handing over the three suspect that were arrested in connection with the seizure to DSC Amidu Suraju, Divitional Crime Officer of the Roro Port Police at the command yesterday, Public Relations Officer of the PTML custom command, Mr. Steve Okonmah said that the custom is set to scan the vehicle further to determine if there are other items concealed in it.
Okonmah as well DSC Suraju has also given assurances that investigations are still ongoing to unravel the misery behind the importation.
Speaking, Okomah said that “efforts are being made to scan the vehicle to know if more items are concealed in the vehicle. Meanwhile, we have three suspects here, Opeifa Akinde, Henry Ugbekere and Olatunbosun Olusoji”
“During the last briefing, the area comptroller made it very clear that nothing harmful or dangerous will come into this country through the PTML command”
He sounded a note of warning that any person who tries to cercumvent the law will not find it easy at the command.
Meanwhile, the importer of the impounded vehicle, Mr. Opeifa Akinde, a lecturer, denied knowlege of the exibits in the vehicle.
He claimed that he had bought the vehicle on the internet from an international auction company; Copat, and that he had paid the neccessary shipping charges for it at Skye bank.
“I bought the car on the internet, i have never been to the US, i have been a civil servant for the past 30 years, the car arrived and i gave it to the clearing agent to clear, i have not even seen the car, i have no knowlege of it and i dont deal in such things”
“I agree that what the customs are doing is right, they need to check the nooks and crannies of any vehicle”