By Oyise OGHENE
LAGOS-FOLLOWING the suspension of DANA Airlines after one of its passenger aircrafts crashed around the outskirts of  Lagos killing all the 153 people on board, The Nigerian Civil Aviation Authority (NCAA), the nations regulatory Agency has awarded a new Airline Operators Certificate to Dana Airline six months after suspending the airline’s operations, after lifting all sanctions imposed on the airline earlier on.

With the issuance of the AOC by NCAA, the Dana airline is expected to resume it full flight operations. 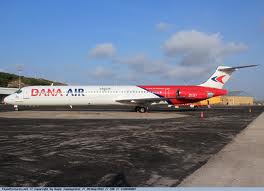 Dana Group’s  Head of Corporate Communications, Mr. Tony Usidamen, said a date of resumption would be announced in due course.

He said in accordance with standard airline safety requirements to ensure that all the aircraft in the fleet were fully serviceable Dana Air recently underwent a rigorous re-certification exercise ahead of its planned resumption of commercial flight operations following lifting of the suspension of its operations in September by the Federal Government.

“The provision of safe, reliable world-class air transport services has always been our focus at Dana Air and we will continue to adhere strictly to safety procedures as required by the Nigerian Civil Aviation Act and all other relevant local and international regulations, “Usidamen said.

He said maximum effort is currently being made by the airline and its insurers to ensure  all insurance claims are fully settled in accordance with applicable law.