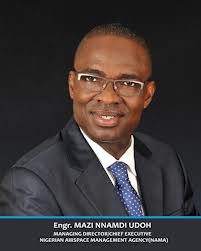 Speaking at the agency headquarters in Lagos, Engineer Udoh pointed out that NAMA would like to use the opportunity to reassure Nigerians, all the airspace users, pilots and other stakeholders that the Nigeria airspace is safe for flight operations.

He said”for record purposes, NAMA wants to use this opportunity and this platform to reassure Nigerians and all our airspace users, pilots and other stakeholders that the airspace is safe and will always be safe”

Engineer Udoh however pointed out that the only challenge that was confronting the agency at the moment was its long range of frequency of communication that it has just introduced affirming that there was no control tower that has a single challenge in the country at the moment.

“Now the simple explanation is this, you will not say that you have total DHF today, what were you doing before, we talk to Lagos, we talk to Benin, we talk to Asaba, we talk to Port-Harcourt or Enugu we called it point to point communication now in Lagos with one frequency you can communicate until you are transferred to Port-Harcourt that is just the meaning of that but because of congestion you have to separate East and West of that sector. So at a certain level and at certain a distance from Lagos, you will be talking to Lagos West, Lagos East which is Port-Harcourt so when you are coming, you will talk to Lagos East which is another frequency, it is the same thing with the North. So it is divided into several parts you are talking to this side and you are talking to that side”

“You don’t have to talk to Kaduna going from Abuja to Kano because it is no more point to point because Kaduna now controls a lower level, Zaria controls a lower level so if you are going from Abuja to Kano you have no business with traffic overhead Zaria or Kaduna, if you do that, then you are going to have conflicts. So if people don’t understand, they will say that the control towers don’t have communication, there is no control tower in Nigeria today that has one single challenge we only have challenge on our long range because it is something new and we are              integrating it and to integrate anything new in our airspace, we must do safety audit, we must look at the analysis because it is now long range and this is important that we get it clear” Udoh stressed.

According to him,”I make bold to present to you that NAMA received an airspace award just on Saturday. So, I will expect any journalist who is here with us to approach NAMA and ask question, I have a record that pilots have been flying blind in the last three months, is it true, there is rather increase in traffic, everyone knew the commitment to fly to Port-Harcourt over the weekend and we had nearly 150 aeroplanes going in and out of Port-Harcourt in two days, of course the airspace there was bereaved, small Port-Harcourt, how do those operations go. So never can it be true that our airspace is unsafe, if it is unsafe, we will tell you, we will issue a Notice to Air Men (NOTAM), there is an avenue to alert people, there is an avenue to seek for help and that avenue has not come up because that is not correct. If it is unsafe we should be able to tell Nigerians not to fly”

Corroborating the assertion of the Managing Director, the Director of Operations, NAMA Alhaji Mukaila Solola stressed that the claim by the Air Traffic Controllers was a campaign of calumny adding that such moves to tarnish the image of the agency and create unnecessary panic amongst the Nigerian travelling public could be as a denial to allow some of the controllers to go on foreign trip by the agency.

Earlier, there was a media report (Not Biztellers) that the Nigerian airspace is gradually becoming a nightmare for pilots flying within the country as indications shows that the radio communications on some routes may have collapsed.