Professor Kamene Okonjo, the mother of Minister of Finance, Dr Ngozi Okonjo-Iweala, who was abducted last Sunday from her home, has been freed. 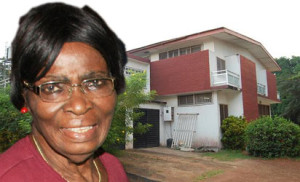 The Ministry of finance has confirmed the release this morning of Kamene Okonjo, mother of Ngozi Okonjo-Iweala, Coordinating Minister for the Economy and Minister for finance.

She was released five days after her abduction which was largely linked to recent threats against the Coordinating Minister by those indicted for fraudulent oil businesses.

A statement from the ministry of finance confirmed her release, saying that the family is excited about the development.

“I can confirm that Professor Mrs Kamene Okonjo, wife of the Obi of Ogwashi-Uku, Professor Chukuka Okonjo and mother of the Coordinating Minister for the Economy/Minister of Finance, Dr Ngozi Okonjo-Iweala was released this morning, five days after her abduction. The Okonjo Family is full of thanks to the Almighty for this happy development.

“The family is also highly appreciative of the support and encouragement of President Goodluck Jonathan;  the Country’s security services for their excellent operations; Governors Emmanuel Uduaghan of Delta, Peter Obi of Anambra, Rotimi Amaechi of Rivers and other Governors as well other friends and well wishers within and outside government for their prayers and encouragement during a very difficult period,” Paul Nwabuikwu, Senior special Assistant to the minister of finance stated in a statement.