By Oyise OGHENE
LAGOS: The D finger of the Murtala Muhammed International Airport (MMIA) was struck by fire at about 11:30am.

Biztellers was at MMIA and gathered that the fire broke out at the construction site which is an extension of the MMIA terminal building of the airport during an ongoing welding work.

When contacted the General Manager Corporate Communications of the Federal Airport Authority of Nigeria (FAAN), Mr. Yakubu Dati pointed out that the fire was caused by the activities of welders working on the site and lasted for about 15 minutes. 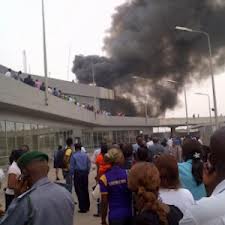 It was further learnt that the fire broke out from the spark of the welding and fell upon the synthetic foams amongst other building materials and thus went into flames.

Mr. Dati however noted that the fire was put off by the  prompt intervention of the fire service men attached to the airport adding that there were no casualties during the fire outbreak.

According to him,”There were no casualties. The only fall out of the incident was the switching off of the power source which has since been restored”.

“Normal activities at the Airport which were not interrupted by the fire have continued as planes are taking off and landing without hitches”.

“FAAN commends the rapid response of the officers and men of its Fire Department and other relevant agencies for restoring normalcy”.

“We remain committed to providing secure, safe and comfortable airport environment as enshrined in the aviation master plan”