LAGOS: The Joint Council of Seaport Truckers (JCOST) has described the proposed collection of N10, 000 by the Nigerian Ports Authority (NPA) for the registration of trucks at the nation’s seaport as extortion and a way of adding to the already cumbersome problems at the ports.

The truck drivers said that, at a recent meeting between them and the NPA, the authority had notified of the electronic port access control which it intends to install at all the nation’s seaport by 2013. Hence, all trucks drivers are required to register their trucks with N10, 000, while the drivers will register themselves with N2, 500 and the motor boys to register with N2, 500 under the new system. 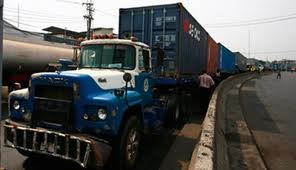 Apart from these, the NPA is also trying to compress all the haulage companies in the country into just 20 registered companies while others will have to be registered under them, the truck drivers have however said that the move will lead to many of their members losing their jobs.

Speaking yesterday in Lagos at the Annual General Meeting of JCOST, executives of the body took turns to condemn the NPA for attempting to extort the drivers through monetary involvement in the new system even as they vowed that they will be ready for the NPA by next year.

Chairman of the council, Alhaji Kayode Odunowo while reeling out the several achievements of the body for the year and the challenges to expect in 2013, said that the body has engaged the NPA in several meetings advising the avoidance of any monetary demands from trucks.

According to him, the union had asked the NPA to issue a letter to the union to this effect for easy documentation, “However, we are still waiting for their communiqué or proposal which shall be made open to members for further action” he said.

Also speaking at the meeting, trailer drivers unit chairman of the Maritime Workers Union of Nigeria (MWUN) Sir. Patrick Onyegbule lamented that truck drivers are already registered with shipping companies, the law enforcement agents and others for a large sum of money and that the addition of another one from NPA is not acceptable.

“The NPA will keep telling us to bring our trucks to standard, but what is the standard of the road we are plying? They must understand that the roads contribute to what makes our trucks rickety, we are paying a lot of money at the port already, and nobody is accounting for them”

According to the MWUN chieftain, the Federal Government should think of providing largesse to truck drivers and the haulage business in entirety just like it is doing to the other sectors operating at the port.

“the government should think of how they will support the seaport truckers by providing funds for them just like they do to other sectors, it is a pity that they do not call on us even when matters concerning transportation comes up, it is only when they want to introduce new levy collections you hear from them, they are playing divide and rule on us” he lamented.